The Democratic Party (DP) and its satellite offshoot Citizen Party (CP) filed a criminal complaint to the prosecution on Wednesday to investigate Yang Jung-suk, a proportional lawmaker-elect recently expelled by the CP, on charges of violating laws governing the election and real estate property management. 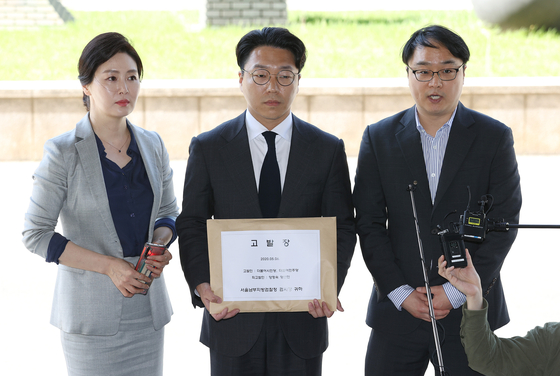 Officials of the ruling Democratic Party and its satellite offshoot Citizen Party enter the Seoul Southern District Prosecutors' Office on Wednesday to file a criminal complaint against Yang Jung-suk, a lawmaker-elect recently expelled by the Citizen Party over allegations of election law violations. YONHAP 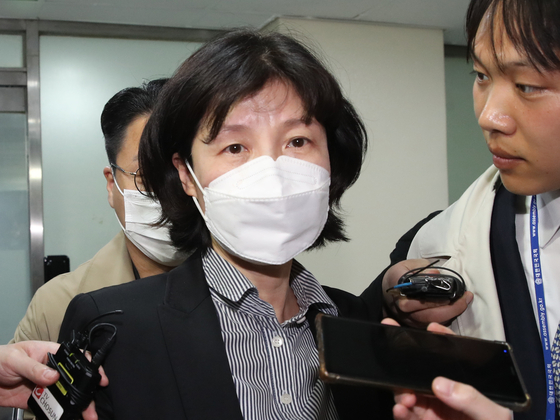 Yang Jung-suk, a lawmaker-elect of the Citizen Party, leaves the party headquarters building on April 28 after the party's ethics tribunal meeting to expel her. YONHAP


Yang, a lawyer elected in the April 15 general elections as a proportional lawmaker of the CP, is facing accusations that she evaded paying tax by registering real estate she owned under someone else’s name.

According to the records she submitted to the National Election Commission, she currently owns three apartments in Seoul and two buildings in Seoul and Bucheon, Gyeonggi. She, however, is suspected of using her siblings' names when she initially purchased some of those properties to avail of a lower tax rate.

Last month, the CP belatedly asked Yang to surrender her status as a lawmaker-elect and hand the seat over to the next candidate, but she refused. The CP expelled her on April 28, but the expulsion did not automatically disqualify her and she remains a lawmaker-elect as an independent. If she is prosecuted and convicted of the charges and sentenced to a jail term or a fine worth at least 1 million won ($800), she will lose her seat as a lawmaker.

After the two political parties asked the prosecution to investigate her, Yang filed a criminal complaint to the prosecution, urging a probe into the CP and KBS for making public her personal information without her permission.

“When KBS first aired an accusation against me before the election, I made my situation clear to the CP by submitting tax payment records,” she said. “And yet, the CP leaked to KBS documents and voice recordings that contained personal information about me and my siblings.”

While attacking the CP, Yang apologized to the DP. She was first nominated as a proportional candidate of the ruling party, but her candidacy was later handed over to the CP when it was founded as a satellite offshoot on the eve of the general elections. “I will ease the concerns of the people and the DP by proving my innocence,” she said.