The ruling party on Thursday elected Rep. Kim Tae-nyeon, a political ally of President Moon Jae-in and current Chairman Lee Hae-chan, as its floor leader for the upcoming National Assembly. 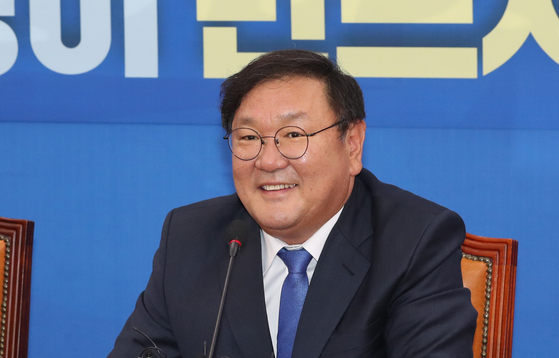 Rep. Kim Tae-nyeon talks to reporters during a press session at the National Assembly after his election as the new floor leader of the ruling Democratic Party. YONHAP


The Democratic Party (DP) held a meeting of lawmakers-elect at 2 p.m. to elect their floor leader. Kim will act as the ruling party’s chief negotiator in the legislature, which will start a four-year term at the end of this month. All 163 lawmakers-elect cast ballots and Kim won 82 votes to win. Rep. Jeon Hae-cheol won 72 votes and Rep. Jung Sung-ho nine.

“I will do my best,” Kim said. “I will make the DP a party of stability and unity. I will put all my efforts into the country’s overcoming of the coronavirus outbreak and success of the Moon administration.”

Kim, 56, was elected to his fourth term in last month’s general elections. A native of Suncheon, South Jeolla, he graduated from Kyung Hee University, the alma mater of President Moon. A former student activist, Kim started his career in a civic group in Seongnam, Gyeonggi. After a decade as an activist, he joined politics by participating in Roh Moo-hyun’s victorious presidential campaign in 2002.

He was first elected a lawmaker in 2004 to represent Sujeong District in Seongnam, Gyeonggi. He was re-elected in that district in 2012, 2016 and last month.

Before the floor leader election, Kim told the DP lawmakers-elect that he is particularly confident in economic issues. “I believe I understand the agenda of the Moon government better than anyone,” he said. “I am an expert in economic policy, and I am the best person to fight the current crisis.”

Since 2017, Kim served as the chief policymaker of the DP for one year and eight months, serving Chairwoman Choo Mi-ae and her successor Lee. After Moon won the presidency in May 2017, Kim served as vice chairman of the State Affairs Planning Advisory Committee, a de facto transition team.

Among Moon's associates, Kim is also known for his ties to Chairman Lee. “I will not forget your sacrifices and dedication to our party,” Kim told Lee after he was elected.

Lee’s term is scheduled to end in August, and the DP will hold a national convention to elect a new chairman.

Kim will act as chief negotiator of the most powerful ruling party in living memory, which is scheduled to merge with its satellite offshoot Citizen Party (CP). The CP’s Supreme Council on Thursday approved a merger plan, and the process will be completed by May 15.

In April's general elections, the DP won 163 district seats, and the CP won 17 proportional seats. Although they together won 180 seats — the first time since Korea introduced its current political system in 1987 that any single political group has won three-fifths of the legislature — the coalition is losing some members. Last month, the CP expelled one of its 17 lawmakers-elect, Yang Jung-suk, for suspected election law violations.

The party also said two of its lawmakers-elect will return to their original parties, instead of joining the DP. As a result of the merger, the DP will end up with 177 lawmakers in the 300-member National Assembly, three seats short of three-fifths of the legislature.