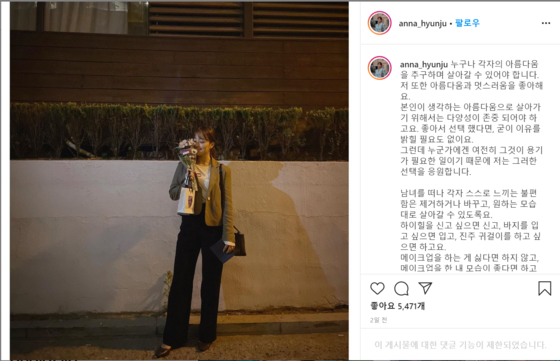 
MBC news anchor Im Hyun-joo warned netizens writing malicious comments about her that she will be filing lawsuits for insulting her and imparting or conveying false information about her on her YouTube channel.

On Sunday, Im also uploaded a post about her standards of and perspectives on beauty. Im gained attention as the first female news anchor to appear on local television news while wearing glasses on MBC’s “News Today” in April 2018.

Two months ago she appeared in the documentary “Series M - Do We Need to Wear Bras” on MBC, during which the anchor could be seen preparing for a news broadcast without wearing a brassiere as part of the “No Bra Challenge.”

Im received a great deal of backlash after an appearance on the MBC talk show “Radio Star” last Wednesday. She openly shared her perspective on gender bias and asked the show’s host Kim Kook-jin to refrain from using the word “feminine.”

The comments section on her YouTube channel is currently closed, and she announced that she will be pursuing action against those who have been insulting her via comments online.