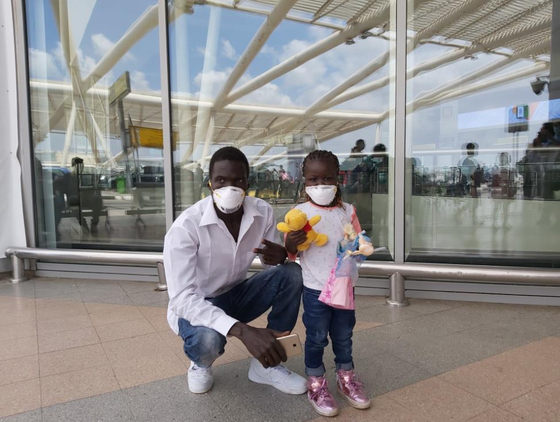 Four-year-old Gloria Gandhi from South Sudan, and her father pose for a photo ahead of a chartered flight to Korea with over 130 passengers out of Cairo, Tuesday. Gloria will undergo surgery at a hospital in Seoul to remove a fragment of iron embedded in her chest. [YONHAP]

A young South Sudanese girl and her father, after a monthslong voyage across four countries to search for a way to remove an iron fragment from the child’s chest, finally arrived in Seoul Wednesday with a group of over 130 stranded Koreans flown out of Egypt on a chartered flight.

After suffering for 10 months, 4-year-old Gloria Gandhi will soon undergo surgery at a hospital in Seoul to remove the iron fragment, slightly larger than the size of a 500 won coin, embedded near her lungs.

Gloria swallowed a the piece of iron in August last year while playing near her house in Juba, the capital of the East-Central African nation. Her 32-year-old father, a street vendor, found out a week later after Gloria developed a persisting cough and he took his daughter to a local hospital to get an X-ray. However, South Sudanese hospitals did not have the capacity or proper medical equipment to conduct the procedure to remove the fragment from her chest. 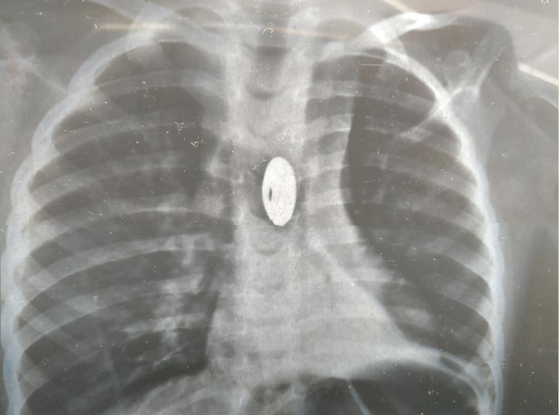 An X-ray of the iron fragment, around the size of a large coin, lodged in Gloria Gandhi’s chest since August 2019. [YONHAP]


The father and daughter eventually flew to Sudan in search of better medical treatment last September, and Gloria underwent surgery at a hospital in Khartoum, the capital of Sudan. An incision was made on her side in an attempt to remove the iron fragment, but the operation was ultimately a failure. Meanwhile, the Gandhis had nearly run out of money.

But Gloria’s father did not give up and in November, the pair took a bus heading further north to bordering Egypt. They had high expectations as Egypt’s medical infrastructure is more advanced than that in Sudan and their home country.

The pair stayed with their relatives in Cairo and in late January met a Korean missionary assisting Sudanese people in Egypt. Gloria visited a hospital in Cairo in February, but her condition continued to worsen and she began suffering from back and chest pains and had difficulty breathing normally. Her worsening symptoms were attributed to the corrosion of the piece of iron, which also raised the risk of infecting multiple organs.

While a surgery was urgent, it would cost around $25,000, which was more than the family could afford, leading the missionary to begin spreading word of Gloria’s situation.

That was how Yonsei University's Severance Hospital heard of Gloria’s plight and offered to cover the cost of the father and daughter’s airfare to Seoul as well as the surgery and their living expenses while in Korea.

However, they faced another hurdle thanks to the coronavirus pandemic as finding flights to Korea became increasingly difficult after Egypt’s suspension of international flights in March.

But on Children's Day in Korea, May 5, Gloria and her father boarded a civilian chartered flight out of Cairo bound for Seoul Tuesday night, according to the Korean Ministry of Foreign Affairs.

The plane landed at Incheon International Airport around 8:30 a.m. Wednesday.

Gloria's father, speaking to reporters in Cairo ahead of departing for Seoul, expressed thanks to the Korean government and Severance Hospital for enabling his daughter to receive the operation.

The surgery to remove the iron fragment at Severance Hospital is scheduled to take place after Gloria and her father complete their 14-day quarantine, the incubation period for the coronavirus.