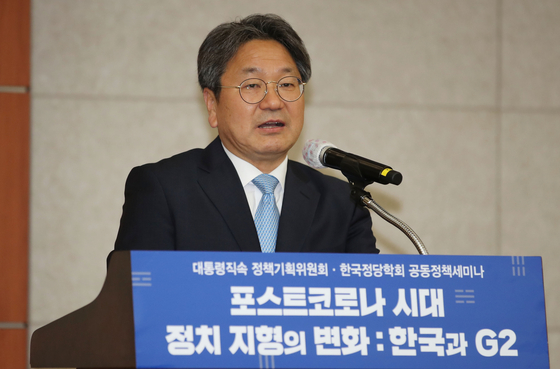 Blue House Senior Secretary Kang Ki-jung raises the need for a universal employment insurance, much like the national health insurance, during a seminar held at a convention center in Yongsan District on May 1. [YONHAP]


Unemployment insurance for all is a once bold idea gaining widespread support, with an administration leader proposing it and suggesting that this level of coverage may make sense.

Kim Myung-hwan, head of the Korean Confederation of Trade Unions, proposed universal unemployment insurance last month and said that a big commitment of government funds would be needed. Then on May 1 — May Day — Blue House Senior Secretary for Political Affairs Kang Ki-jung said much the same during the Presidential Commission on Policy Planning seminar on the post-Covid-19 era.

Kang said in the post coronavirus era every Korean should subscribe to employment insurance, as they do now with the national health insurance.

“It is my thought that it would be best where job policy is firmly established as a broader social safety net,” Kang said.

“Our highest goal is to capture everyone in the blind spot,” Kang said.

The following day Vice Finance Minister Kim Yong-beom wrote on Facebook that the recent novel coronavirus has undermined systems built by each and every country to overcome the numerous economic crises, including the Great Depression.

Kim said it is an urgent matter considering the massive unemployment shock that is to come.

Although he tried to draw a line by saying his post does not mean he is advocating for the universal employment insurance, the vice finance minister said the novel coronavirus pandemic has raised the need of discussion in improving the job safety net for people that have been denied access to the benefits of the employment insurance.

According to the Korea Employment Information Service, as of March the number of people subscribing to the employment insurance totaled 13.8 million. That’s fewer than half of the 27.8 million economically active, whether they are employed or run their own businesses.

The coronavirus pandemic has affected almost all businesses, with the notable exception of online delivery platforms, and concern is on the rise about so-called special-type employees, such as door-to-door salespersons such as insurance salespersons, parcel delivery workers, designated drivers and private home tutors.

The government estimates such workers to be around 2.2 million, about 8.2 percent of people actively participating in the economy.

Many of these jobs require face-to-face interaction with customers, and these were some of the jobs most hard hit by the outbreak. Yet many of such workers do not subscribe to the employment insurance, as under their contracts they are labeled as sole proprietors.

“With industrial changes and the means of employment diversifying, those that are in the blind spot of the employment insurance is increasing,” said Kim Seong-hee, Korea University Institute for Research on Labor and Employment professor.

“Especially for employment insurance for non-regular employees working at small businesses with fewer than five workers, the barrier is high, as it is required to work for more than 180 days to have access to the benefits.”

One of biggest obstacles in expanding employment insurance is the financial resources.

But in the case of self-employed and those working in special job types, the worker pays 100 percent of the contribution. 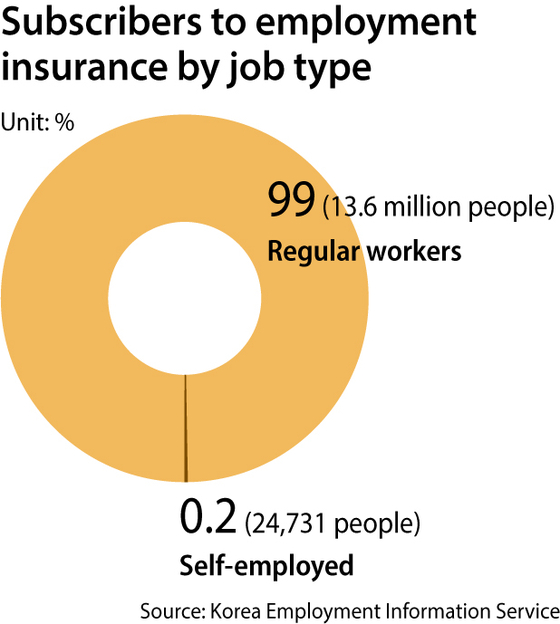 Some of the lawmakers of the ruling Democratic Party have even advocated using taxpayer money to finance unemployment insurance for more beneficiaries.

Park Kwang-on, a senior member of the Democratic Party, on May 4 proposed that the party focus on the universal employment insurance in the next National Assembly session that kicks off on May 30.

“It is a necessary system,” Park said on the universal employment insurance. “We have to immediately pass related bills to expand the employment safety net,” he said, stressing that it is necessary in overcoming the economic crisis created by the coronavirus pandemic.

He hinted on the need for aggressive government funding if needed.

“It is extremely sad if [controversy over fiscal soundness] becomes an obstacle in creating means and methods in overcoming the crisis,” Park said.

Cho Joon-mo, economics professor at Sungkyunkwan University, says if taxes are to be used to include those that have been denied of the unemployment benefits, stricter rules, including those on transparency, have to be applied simultaneously.

The employment insurance itself has struggled in recent years.

The fund’s investments yielded a 7.06 percent net last year, up from its 2.22 percent loss in 2018 and higher than the 6.4 percent in 2017. Despite the financial upswing, the program still ran an overall deficit of 2.2 trillion won in 2019, nearly triple the deficit from the year before.

Considering its financial situation, if the employment insurance is to be expanded to include every person working, the government would have to either raise the insurance rate or raise taxes or, in the worst case, both.

The government in October last year raised the rate for unemployment contribution from 1.3 percent applied to 1.6 percent.

“Universal employment insurance is a heavy subject, which would mean transitioning from a medium burden and medium welfare to a higher burden and higher welfare and from fund-based to tax-based management,” Prof. Cho of Sungkyunkwan University said. “If the system is to be adopted, efforts must be made to save tax by raising the efficiency of existing [public] systems.”