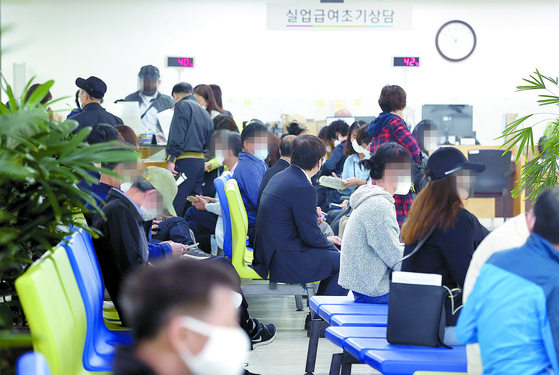 People wait at the employment service center in Seoul to apply for jobless benefits. According to the Ministry of Employment and Labor, payments disbursed to recipients last month increased by 34.6 percent on year. [YONHAP]


As unemployment numbers and jobless benefits continue setting new records in Korea, the government is moving closer to President Moon Jae-in’s pledge to extend the safety net to all workers, with more than 75,000 artists on the cusp of becoming eligible.


The National Assembly's environment and labor legislation subcommittee on Monday passed a revision to the Employment Insurance Act during a plenary session, following an unexpected agreement between lawmakers in both the ruling and opposition parties. But it's unclear whether lawmakers will put the bill to a full vote before the session ends on May 20.

Under the bill, artists, defined by the government as those who contribute artwork to enrich the country culturally, societally, economically or politically, would qualify for 1.1 million to 2 million won ($899 -$1,633) worth of monthly unemployment benefits, about 60 percent of the average monthly income in Korea. They would also qualify to receive parental allowances.

As of May 4, the Korean Artists Welfare Foundation lists 77,731 artists currently certified by the organization.

The proposed law stipulates, however, that only those artists that have signed an employment contract with an organization to offer “culture or art-related services, technical support and performances” may qualify.

Lawmakers have expressed interest in extending employment insurance to other non-regular workers, such as salespeople, insurance planners and delivery workers, but were unable to strike a broader agreement. Other categories of uninsured workers are scheduled to be discussed in the National Assembly’s 21st session, expected to begin May 30.

The National Assembly passed legislation to lay the foundation for a public employment support program to help young people and those in lower income brackets who have been out of work for an extensive period. The support program will provide individuals a maximum of 3 million won, or 500,000 won over a six-month period, and will take effect on the first day of 2021.

Labor Minister Lee Jae-kab said Monday the ministry will work with related institutions, including the National Tax Service, the Korea Workers’ Compensation and Welfare Service and the National Health Insurance Service, to increase the accuracy of workers’ income data, which would be used to expand the employment insurance system.

Lee indicated that insurance costs might be calculated based on the recipient’s income rather than individual’s monthly wage, which the current system is based on. The change would be necessary to extend the system to include freelancers and artists, whose income typically varies month-to-month.

“We will take a step-by-step approach on this matter and gather opinions from interested parties to fix additional details,” Lee said.

Critics say the government’s initiative would not be as effective if the recession continues on and fewer jobs are available in the market. As an employment contract is necessary to receive benefits, a shrinking job market will make it harder for people to sign up for employment insurance.

According to the Ministry of Employment and Labor, the number of individuals applying for job-seeking benefits reached 129,000 in April, a 33 percent increase from March and the highest jump since 1998 during the foreign exchange crisis. 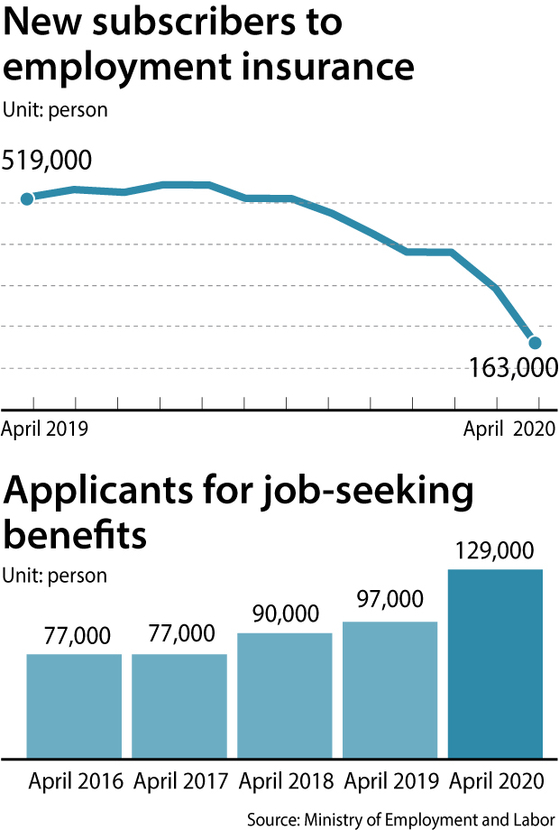 A record 993.3 billion won was distributed in unemployment benefits last month. Payments are likely to exceed the budget set for this year if the government decides to maintain the current rate of delivery.

In the manufacturing industry, considered as the backbone of Korea’s economy, new employees paying into the program dropped by 40,000 people in April, extending the downward trend to eight consecutive months.

“If investment and consumption from the private sector continue to decrease, it will only lead to more people falling into the low-income bracket,” said Kim Dong-won, a visiting professor of economics at Korea University. “Before considering spending money on the economically vulnerable classes, the government needs to come up with policies that can minimize the number of people who fall into the low-income bracket.”

Have employment insurance, will ride