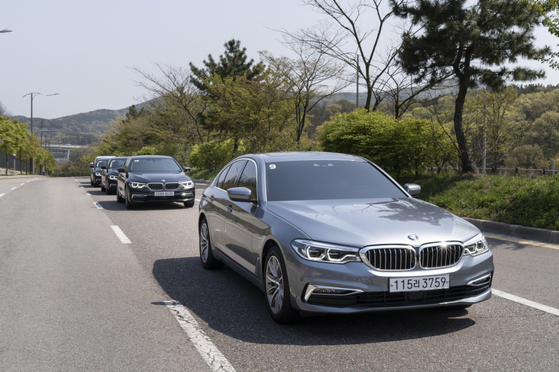 The 530e PHEV is driven down the road on Yeongjong Island during a media test drive event held earlier this month. [BMW KOREA]


It hit the Korean market last year with its 530e PHEV, going up against Hyundai Motor’s Ioniq and Niro from Kia Motors.

Planning for an all-electric future, BMW aims to launch 25 electrified models by 2023, with 13 of them being fully electric. Since it first came to market with eco-friendly options in 2013, BMW sold a total of 50,000 electrified vehicles — battery electric and PHEVs — as of the end of last year. 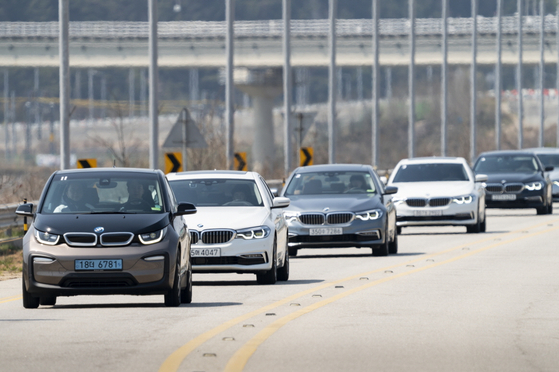 
The German automaker entered the local plug-in hybrid market in 2015 with its i8 coupe, and it sold a total of 521 units of 530e sedans in Korea since it brought it to the country in December.

Whoever makes them, PHEVs do seem an inferior option for the buyer. You want them because they look cool and speak of environmental value, not because they offer anything better for everyday life.

But my thinking quickly changed once I started a 50-kilometer (31-mile) drive in the 530e PHEV on Yeongjong Island earlier this month.

Tranquility, practicality and driving pleasure won me over and encouraged me to rethink PHEVs.

The car was remarkably quiet, even though I was practically racing from the start of the drive at the BMW Driving Center on the island. At all speeds, its engine stayed almost silent. My heart skipped a beat when the navigation system told me to slow down for being above the speed limit.

The PHEV provides three driving modes — MAX eDrive, Auto eDrive and Battery Control. MAX eDrive runs on pure electric power and can hit 140 kilometers per hour, while the Battery Control mode allows the battery to recharge while the car is driven.

Unlike Ioniq and Niro, which were criticized at first for the choppy transition from electric power to internal combustion, the changeover was almost impossible to detect it in the 530e. If I had my eyes closed, I wouldn’t have known whether the car was electrically powered or burning fossil fuels.

The car, equipped with an 8-speed automatic transmission, hugged every corner however severe it was, and the comfort was maintained no matter how fast and furiously I drove. The 530e kept to the BMW tradition of “sheer driving pleasure.” 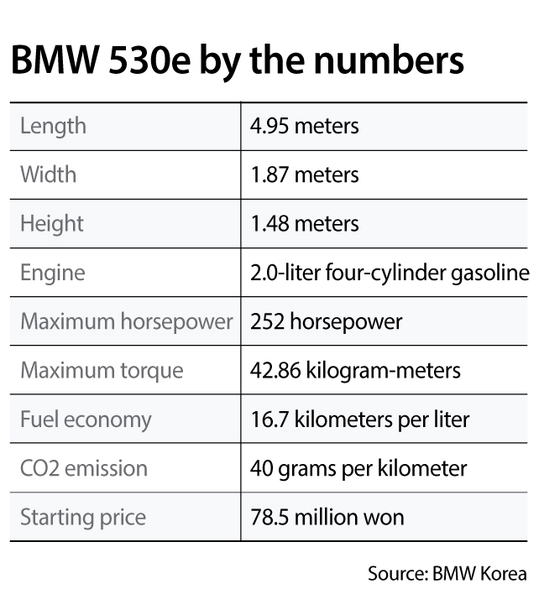 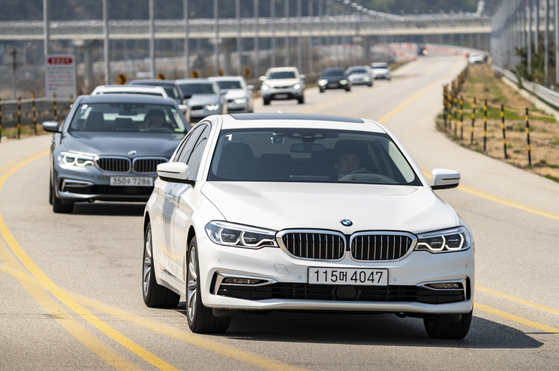 
With a 120 kilowatt-hour lithium-ion battery, a 2.0-liter four-cylinder gasoline engine and an electric motor, the 530e is rated at 252 horsepower and 42.86 kilogram-meters (310 pound-feet) of torque.

But the bigger problem with PHEVs, even if they are from BMW, is that they can only go for so long whatever their performance level may be.

For most, electric cars are not all that practical. Imagine stopping five times a day to recharge.

But the 530e laid siege to my doubts. After driving 22 kilometers flipping between MAX eDrive and the Auto eDrive mode, I was surprised to see that the available distance did not decrease by 22 kilometers, because the battery was recharged by the internal combustion engine.

Moreover, the car looked beautiful, something not often said about eco-friendly cars.

The PHEV, at 4.95 meters (16.2 feet) in length, 1.87 meters in width and 1.48 meters in height, looks just like any other 5 Series model. With the same emblematic dual kidney grille, sharp but bold LED headlamps and elegance embedded throughout the body, the 530e keeps the visual legacy of the German auto brand.

The eDrive badge can be removed, so only the charging port on the front left and the 530e badge hint of the electrified powertrain.

The car also had an array of high-tech digital safety and convenience features that now have become mainstream offerings for any globally sold cars. The 10.25-inch touchscreen infotainment system allowed me to easily roam back and forth from the media and navigation screen. The minimal noise level helped me enjoy my music playlist using Apple CarPlay.

Collision avoidance assist, lane keeping assist and all the other sensor-based safety systems were all there, but it’s hard not to expect them considering the fact that the 530e is priced at 78.5 million won ($64,400). For being a PHEV, the 530e is 5.7 million won more expensive than the 530i Luxury Plus model, the most comparable gasoline model in the BMW 5 series.

When compared with domestic PHEV models — Ioniq is priced at 33.38 million won — the price may seem overwhelming. But for some, the price point may be just right.

The more the driver gets used to changing the modes, the more they will get out of the car. I felt I could use the 530e for the daily commute without having to search for a charging station anxiously half way to the office. Even if charging is necessary, the charging problem is not as big as expected.

According to the Korea Transportation Safety Authority, the average daily driving distance per car has been less than 39 kilometers since 2015. This means the majority of the population will not often face charge-station anxiety with the 530e.

But it’s safe to say that the 530e may not be the car of choice when traveling from Seoul to Busan.

There are now 50,000 public and private charging facilities in the country, but pure electric cars still remain a relative rarity. In the transition from the internal combustion engine to pure electric, 530e serves as an accessible option for the environmentally mindful, and others for that matter.