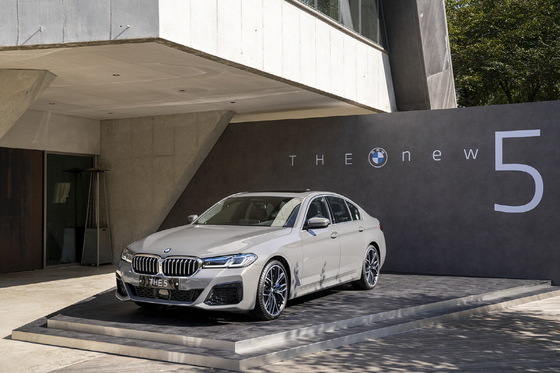 BMW's face-lifted 5 Series on display at a cafe in Gwangju, Gyeonggi, on Oct. 5. [BMW KOREA]


GWANGJU, Gyeonggi — With nobody touching the steering wheel, the face-lifted BMW 6 Series reversed out of a narrow alleyway, with the driver only controlling the accelerator and brake. The steering wheel spun to the right and left on its own as it drove backward.

Dubbed the Reversing Assistant, this driving assistant technology is newly installed in all trims of the face-lifted 5 and 6 Series launched in Korea on Oct. 5.

It could come in handy for novice drivers when confronted with Seoul's narrow, winding, occasionally dead-end streets.

BMW Korea held a media test drive session on Oct. 5, roughly five months after the German carmaker held the world premiere for the two face-lifted models in Korea, a first for any import carmaker.

Korea is one of the biggest markets for the 5 Series, having sold 77,000 units of its seventh generation model over the past four years as of August.

Between January and August, Korea was the biggest market in the world for the model, with 14,133 units bought, according to the carmaker. 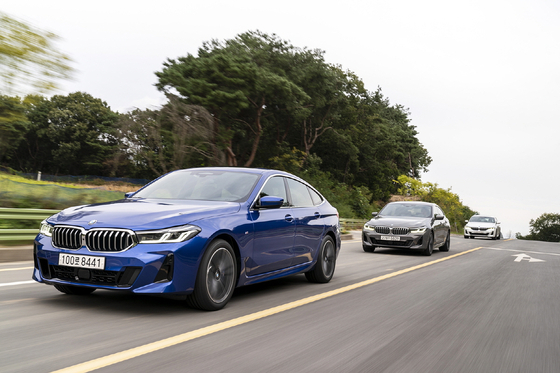 The facelifted 6 Series on the road. [BMW KOREA]


The Korea JoongAng Daily got to test out the gasoline-powered 540i xDrive M Sport on Monday.

The sporty car excelled in offering a dynamic driving performance without jeopardizing its stability at speed. The vehicle responded immediately to the accelerator, jumping off the line to easily exceed speeds of 150 kilometers (93 miles) per hour.

Under speeds of 140 kilometers per hour, the car is able to cruise on its own using its Driving Assistant Professional, which pretty much offers the same partially autonomous driving features available on other models, such as keeping its distance from the car in front and staying within the lanes.

When the function is turned on, the digital cluster behind the steering wheel provides a 3-D graphic of nearby roads and vehicles.

What differs from other models is that its lane keeping assistant — which is a default function that activates even without the Driving Assistant Professional system turned on — actively engages with the driving. When this reporter tried to change lanes on an empty road without turning on the signal, the vehicle jacked back the steering wheel, trying to keep the car in lane.

Its driving interventions did not stop there.

When the vehicle was exceeding the speed limit, the internal navigation system repeatedly ordered the driver to slow down, while other cars usually offer gentler warnings or suggestions.

The 630i xDrive GT M Sport provides a similar level of driving assistant technology to the 5 Series, while its driving performance was heavier and more elegant, although it lacked that powerful thrust at the start.

The 5 Series comes in five types of gasoline engines, two types of diesel engine topped with a 48-volt electrical system and one plug-in hybrid. 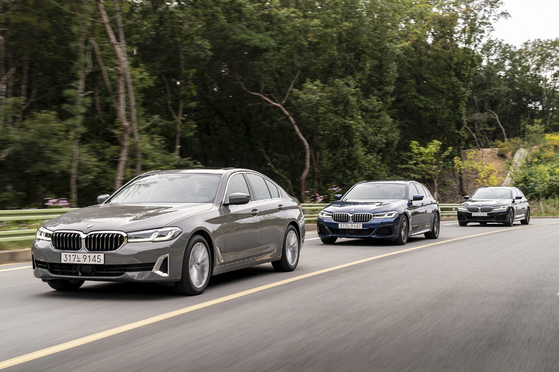 
The 6 Series comes in three types of diesel engines and two types of gasoline engines. Currently, only one trim — the 630i — is available in Korea, and its price starts at 89.2 million won with a maximum horsepower of 258 and torque of 40.8 kilogram-meters.

The flagship 5 Series is expected to go take on its rival Mercedes-Benz E-Class, which also launches its face-lifted version this month.

In September, Mercedes' E 300 4MATIC was the best-selling imported car in Korea with 680 units delivered, while BMW's 520 came in seventh with 447 units.