Lee Yong-soo, a 91-year-old survivor of Japan’s wartime slavery, said former comfort women have been politically exploited for decades by a civic group and an activist-turned-lawmaker-elect Yoon Mee-hyang, expressing skepticism about their financial transparency and integrity. 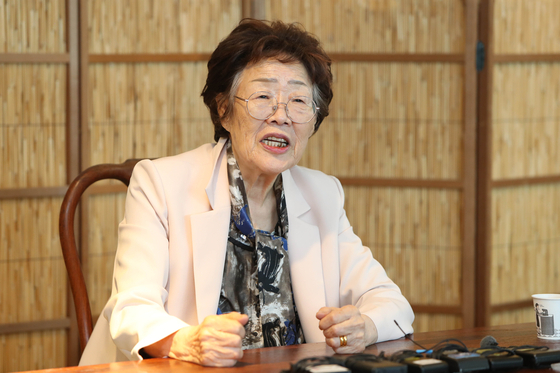 Lee Yong-soo, survivor of Japan's wartime sexual slavery, talks at a press conference in Daegu on Thursday to criticize a civic group and activists for having exploited the victims for three decades. [YONHAP]

Lee held a press conference on Thursday in Daegu and demanded that the weekly rally on Wednesday to pressure Japan to redress the comfort women issues be stopped. “Wednesday demonstrations must be put to an end,” Lee said. “It helps no one. You don’t even know where the contributions of the participants are being spent.”

Lee is one of the survivors of Japan’s sexual slavery during the World War II. In 2007, she testified before the U.S. joint Congressional session about her ordeals. Her testimony, along with two other victims, led to the House unanimously passing a resolution urging Japan to issue a formal apology.

Lee declared that she won’t attend the Wednesday demonstration starting next week, although she will never stop demanding an apology from the Japanese government. “The organizer just exploits the students and takes away their pocket money, while giving them no proper education.”

The weekly protest, held in the presence of surviving victims in front of the Japanese Embassy in Seoul, has been led by a civic group, the Korean Council for the Women Drafted for Military Sexual Slavery by Japan, since 1992. The council, established in 1990, changed its name in 2018 to the Korean Council for Justice and Remembrance for the Issues of Military Sexual Slavery by Japan.

“Since June 1992, I always went to the Wednesday demonstration, when it rained, snowed, whether hot or cold,” Lee said. “Elementary and middle school students gave their allowances from their parents to us, and my heart broke every time. How was the money spent? Was it spent for our meals? For a short period, it was, but the organizer spent it all. Donations were never spent on the victims.”

“The demonstration only teaches the youngsters hatred and wounds,” she said. “Youngsters of Korea and Japan, who undergo proper history education, must befriend each other and talk to each other to resolve the problem.”

During the press conference, Lee questioned the financial transparency of the Korean Council. “I don’t know anything about all the cash coming in to the council,” she said. “But when they collect donations, the money should have been spent on the victims, but they never did that.”

Lee was particularly critical toward Yoon Mee-hyang, former leader of the council. Yoon was elected as a proportional lawmaker of the Citizen Party in last month’s general elections. Lee said Yoon’s earlier claim in a recent media interview that she had endorsed her is a “complete lie.”

“When Korea and Japan signed a settlement in 2015, she knew in advance that Japan would send 1 billion yen [$9.4 million],” Lee said. “The Foreign Ministry is also at fault. The victims should have been informed about the settlement, but only the Korean Council knew.”

“Yoon must resolve the issue,” Lee said. “She is unfit to serve as a lawmaker. She needs to resolve the remaining problems. How come we do all the tricks like a bear in a circus while she collects all the profits?”

Yoon tried to downplay Lee’s attacks. “I will receive her remarks at the press conference as her desire for a faster settlement of the issue,” she said. “I also think that the time has passed for the victims to attend the Wednesday demonstration. I think she is asking us to handle the issue, because she can no longer actively participate.”

Yoon also said Lee was happy for her election. “I am willing to work as an activist on the field till my death,” she said. “Working as a lawmaker means I will work in a different field. It doesn’t mean that I will no longer work on the issue.”

Han Kyeong-hee, secretary general of the Korean Council, told the JoongAng Ilbo on Thursday that donations were sent transparently. “We make public the details of the donations and spending on our homepage,” she said. “The money was spent to support the victims, offer shelter, build a museum and publish books.”