Several facilities connected to an advocacy group for the victims of Japan's wartime sexual slavery were raided Thursday by prosecutors, who are investigating allegations that it exploited the survivors and misappropriated donations.

Teams of prosecutors and investigators sent by the Seoul Western District Prosecutors’ Office spent 12 hours raiding two Mapo District offices of the Korean Council for Justice and Remembrance for the Issues of Military Sexual Slavery by Japan. An additional raid began at 1 p.m. on Thursday at a shelter run by the Korean Council, known as the House of Peace, also in Mapo District, western Seoul. 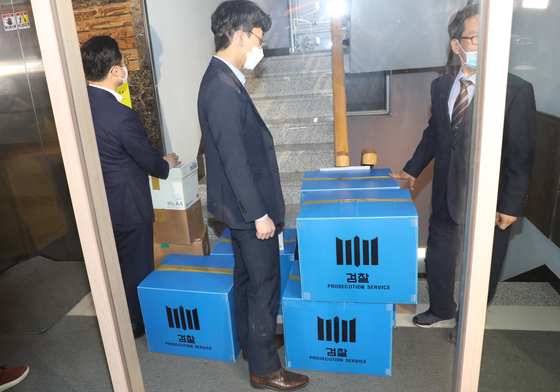 Prosecutors move boxes of seized materials from the Korean Council for Justice and Remembrance for the Issues of Military Sexual Slavery by Japan on Thursday after a 12-hour raid. [YONHAP]

The raids ended Thursday at around 5:30 a.m., and boxes of material were removed from the two locations as prosecutors investigate corruption allegations directed at the civil group.

Later in the day, the prosecution went to the House of Peace, where a victim of Japan's sexual slavery during World War II, Gil Won-ok, is living. Myungsung Church in 2012 donated the property to the Korean Council to be used as a home for the victims, or so-called comfort women. A second victim, Kim Bok-dong, lived at the property until passing away in January last year.

Prosecutors obtained a separate warrant for that raid based on a finding that the Korean Council stores some of its records there.

The prosecution has received several criminal complaints alleging wrongdoings by the civic group and its former leader, Yoon Mee-hyang, who was elected last month as a proportional lawmaker for the ruling Democratic Party (DP). The complaints were filed after Lee Yong-soo, a former comfort woman and longtime advocate for other victims, held a press conference earlier this month to question their integrity. Lee accused the Korean Council and Yoon of politically exploiting the victims for three decades and misappropriating public donations. 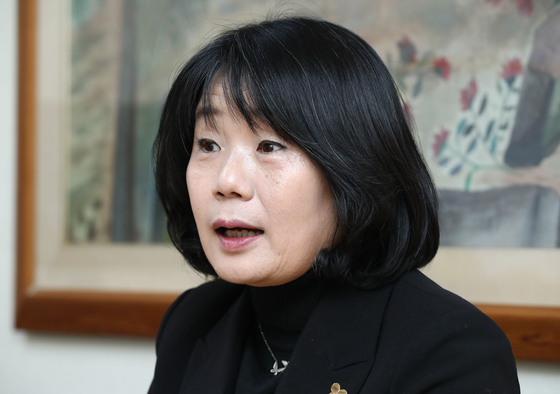 Yoon Mee-hyang, a lawmaker-elect of the ruling Democratic Party and former head of the Korean Council. [YONHAP]

The Korean Council has admitted to “accounting errors” but has denied allegations of embezzlement and misappropriation.

Yoon has denied the allegations against her but recently dropped out of the public eye, canceling scheduled appearances and failing to show up to a Wednesday seminar for first-time lawmakers at the National Assembly.

Yoon and the Korean Council were also accused of pressuring survivors to reject restitution offered by Japan, presumably to keep the matter unresolved in order to continue their activities. Of the 240 victims registered with the government, only 18 are alive now.

The first criminal complaint against the group was filed on May 11, and the Seoul Western District Prosecutors’ Office assigned the case to a department in charge of fair trade and economic crimes on May 14.

The advocacy group was established in 1990. It has organized weekly demonstrations in front of the Japanese Embassy since 1992 and was renamed in 2018.

Since 1992, Yoon has worked for the civic group at key posts and has served as its head since 2008 until she ran for the legislative seat this year.

The Korean Council said it will commission an outside accountant for an audit. The Ministry of the Interior and Safety also said it will conduct a separate audit on the civic group.

“We express regret that the prosecution conducted raids while a process is ongoing to arrange an outside audit,” the Korean Council said in a statement posted on its website on Thursday. “We hope a fair investigation will quickly resolve all suspicions raised against us.”

The Korean Council requested a recommendation for an outside auditor from the Korean Institute of Certified Public Accountants on May.

“We decided not to make a recommendation,” a senior member of the institute told the JoongAng Ilbo on Thursday. “Because the prosecution is investigating the case, it is hard for an accounting firm to get records necessary for an audit.”

Another source from the institute told the JoongAng Ilbo that no accounting firm was willing to take the job because of the political burden. Accounting experts said the civic group needs a fraud investigation, not an ordinary accounting audit.

Yoon and other members of the Korean Council are expected to be questioned by the prosecution.

Yoon has thus far remained silent and has resisted pressure to surrender her lawmaker seat. The DP continued to defend her on Thursday.

“We are a public political party, so we need to verify the facts first,” said Rep. Kim Tae-nyeon, floor leader of the DP, in an interview with the Christian Broadcasting System radio station. “No matter what happened, Yoon is a lawmaker elected by the people. We need to be prudent before making any decision.”

He noted that many government authorities are looking into the Korean Council.

"Some party members said we need to suspend her party membership temporarily in order to avoid political burdens, but we will wait for audit outcomes to make that decision,” he said.

But the Justice Party, a key ally of the DP, has distanced itself from Yoon, saying it has no faith in the lawmaker-elect.

“Yoon flip-flopped her explanations several times about the alleged corruption,” Justice Party Chairwoman Sim Sang-jeung said Thursday. “Her family members are also involved in the scandal. Therefore, her words are no longer trustworthy.”

Sim said the DP must show a more responsible attitude, since it vetted and nominated Yoon as the candidate. “The DP must investigate the scandal, reveal the truth to the people and assume responsibility,” she said.

Lee, the victim who first raised suspicions about the Korean Council and Yoon, plans to hold another press conference on Monday. Some media outlets reported Wednesday that Yoon had visited Lee on Tuesday to offer an apology and mend their rupture. A person who attended the meeting told the JoongAng Ilbo that the mood was not amicable. 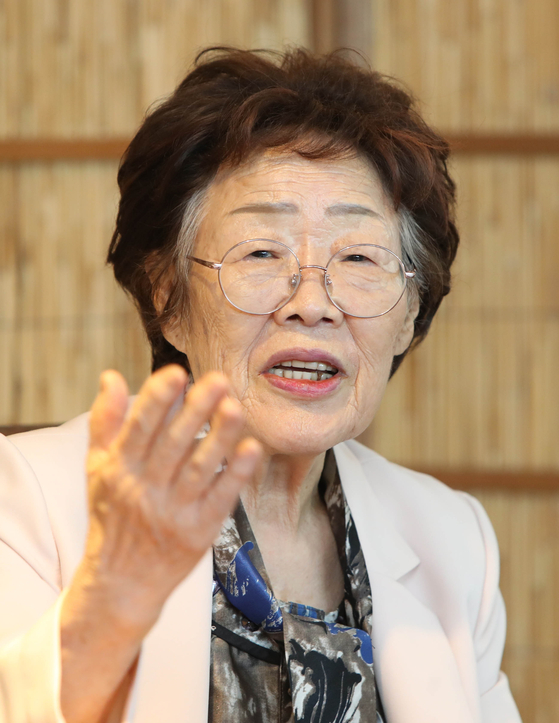 Lee Yong-soo, a 91-year-old survivor, held a press conference on May 7 in Daegu and accused the Korean Council and Yoon Mee-hyang for exploiting the victims for 30 years. [YONHAP]

“Lee hugged Yoon [because Yoon asked for it], but Lee did not forgive her,” the person said. “Lee told her that everything will be judged by the law. Lee told Yoon that she will soon hold a press conference, and Yoon should be there.”