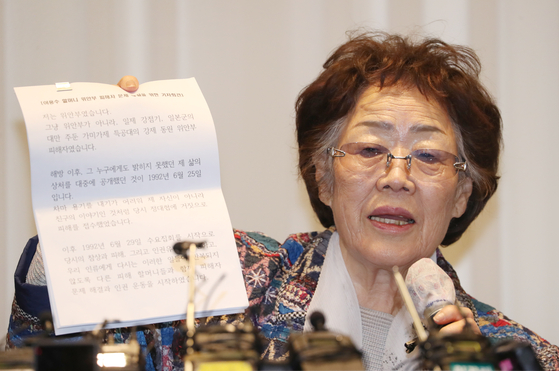 Lee Yong-soo, a 91-year-old ’comfort woman“ survivor, holds up notes at her second press conference at the Hotel Inter-Burgo in Daegu on Monday. [YONHAP]

Lee Yong-soo, a 91-year-old survivor of Japanese wartime sexual slavery, said that if lawmaker-elect Yoon Mee-hyang is “guilty of a crime,” she must be punished.

At a press conference at a hotel in Daegu Monday afternoon, Lee elaborated on charges she made at a press conference on May 7, in which she questioned the integrity and financial transparency of Yoon and the Korean Council for Justice and Remembrance for the Issues of Military Sexual Slavery by Japan, a civic group Yoon led.

Lee, a longtime rights activist, cast doubt on the group's use of donations for the so-called comfort women.

At Monday's conference, Lee noted various allegations that have been raised about the Korean Council and Yoon in the recent weeks. “Resenting and accusing someone, I already covered that in my first press conference. But many things beyond the imagination have come up. I think that is something that the prosecutors will have to take care of.”

Lee lamented being used by the civic group for three decades and accused the Korean Council of “collecting the money” while putting the comfort women victims on show, comparing them to “bears doing tricks.”

Last week, prosecutors raided facilities linked to the Korean Council after starting an investigation into allegations that the group exploited the survivors and misappropriated donations.

Lee’s press conference was initially set to be held at a teahouse in Daegu, but was changed at the last minute to the Hotel Inter-Burgo Daegu to accommodate the large number of media. The press conference started 40 minutes late and a masked Lee arrived in a wheelchair to speak in front of some 200 reporters. However, she was able to walk with some help to and from a platform.

Lee started the press conference by holding up a sheaf of A4 papers with prepared notes in large print.

Lee is a survivor of the Japanese military’s forced recruitment of girls and young women into sexual slavery before and during World War II, who were euphemistically referred to as “comfort women,” and a longtime activist for other victims.

Lee was able to recount her first appearance as a comfort women survivor and meeting with Yoon, who was an administrative staffer at the Korean Council, in 1992. She gave accounts of her trepidation about donation drives over the years, and details of what occurred last week when Yoon came to visit her.

On May 19, Yoon reportedly visited Lee at her residence in Daegu and knelt down and apologized to her. The media reported that Lee said at the time she would hold her final press conference, inviting Yoon to take part in it. It was reported that Lee had tears in her eyes and hugged Yoon at one point. All of these details suggested some kind of rapprochement.

In the following days, Lee denied reports she has forgiven Yoon and said, “It is right for the betrayer and the person betrayed to sit next to each other, and this can reveal the wrong.”

During the Monday press conference, Lee recounted what really happened last week with Yoon. She said she came to her house and asked her to open the door.

“Yoon Mee-hyang entered, and I was taken aback,” said Lee. “She knelt down and asked me to forgive her. Forgive what? You have to come with something to be able to forgive […] I told her that I will hold a press conference in a few days and to come.”

Lee continued, “She asked me to hug her. So I thought, 'This is the end.' And I hugged her. I am only a human. We were together for 30 years, and not enemies.” At this point, she broke out in a fit of coughing.

She continued, “I was overwhelmed with tears, and I hugged her and cried.” Lee added that she was later “astounded” when Yoon used this incident and asked the press to write articles suggesting that Lee had forgiven Yoon.

Yoon, who was elected a proportional lawmaker for the Democratic Party’s satellite Citizen Party last month, did not show up at Monday's press conference.

Yoon has rebutted the various allegations against her and said she has no plans to relinquish her term, which starts May 30. The lawmaker-elect has been questioned in media reports about the purchase by the Korean Council of a house in Anseong, Gyeonggi, in 2013 for much higher than market value, as well as how she afforded the purchase of her apartment in Suwon, Gyeonggi, among other allegations also targeting her family members.

“I saw that a center [for the comfort women victims] was lavishly built in Anseong,” said Lee at Monday's press conference. “I heard that the mighty Yoon Mee-hyang’s father lived there. Many such cases have come out, but that will all be revealed by the prosecutors’ office.”

Lee said, “One who commits crimes should be punished.”

Lee said Yoon had told her to go ahead with the press conference. She accused Yoon of being “filled with selfish interests and desires,” which was why she ran for the National Assembly.

Lee accused Yoon of having abandoned the comfort women issue to run for office. “How can you just disregard everything, without a word, after 30 years together?”

Lee also recollected Kim Bok-dong, a former comfort women victim and fellow rights activists two years her senior, who died in January 2019 after battling cancer, lamenting that Kim, who was “blind in one eye,” was also used by the Korean Council for fund-collecting, even being sent to tour the United States despite her advanced age and poor health.

Lee accused Yoon of “shamelessly crying crocodile tears” at her grave after years of “using” Kim.

In her May 7 press conference, Lee declared she would no longer take part in weekly Wednesday rallies organized by the Korean Council. The civic group was first established in 1990 as the Korean Council for the Women Drafted for Military Sexual Slavery by Japan and has organized demonstrations every Wednesday since 1992 to demand an apology and compensation from Japan.

The late Kim Hak-sun publicly testify about her experience as a survivor of the Japanese military’s sexual slavery in 1991, leading to widespread awareness of the issue.

Lee noted, “Korea and Japan are neighbors. Our students eventually will be the owners of the countries. So these students need to know why we need an apology and compensation.” She encouraged friendly exchanges between the two countries’ young people and teaching them “correct history.”

She said, “The students are the ones who will resolve the issue of the wrong done to the comfort women victims.”

Lee added, “The two countries need to be neighborly and know history, and we need to receive an apology and compensation [from Japan] for the comfort women issue in order to be liberated of this burden of having been ‘comfort women.’”

During Monday's press conference, Lee stressed that there is a “big difference” between the victims of wartime sexual slavery and the men and women forced to work in Japanese factories during Japan’s 1910-1945 colonial rule over Korea. She said that it was wrong for the Korean Council to lump the two issues together in its activities.

Lee even took the opportunity to address the last-minute change of location of the press conference, saying she wanted to accommodate the large number of reporters.

She said, “They say that there is the spread of coronavirus, and if we held it at that small place, I would have been worried for you.”

The press conference was broadcast live on seven channels and earned a combined viewership of over 10 percent, indicating high public interest in the issue, which goes beyond the fallout between the two women and deals with political polarization, diplomatic relations, history, the transparency of civic groups and resolving the wartime sexual slavery issue.