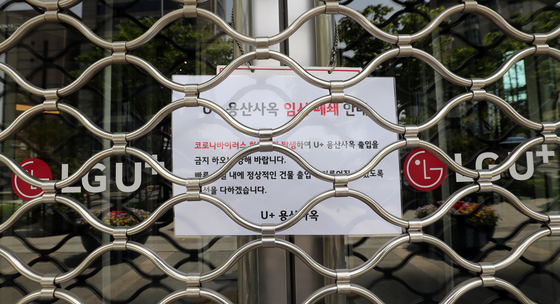 A note at the building of mobile carrier LG U+'s headquarters in Yongsan District, central Seoul, informs of a temporary shutdown on Monday. [YONHAP]


Companies are bracing for a possible second wave of the Covid-19 outbreak, canceling plans to bring workers back to the office from home, following a cluster of cases centered around Seoul's Itaewon neighborhood.

Korea’s two largest IT companies, Naver and Kakao, planned to normalize office work this week. Those plans were changed after the number of Covid-19 cases started rising.

Both Naver and Kakao are located in Bundang, Gyeonggi, an area known for its cluster of IT and game companies and quite far from Itaewon in central Seoul.

But the 29-year-old man from Yongin, Gyeonggi, who seems to have touched off the Itaewon cluster while clubbing on May 2 works for TmaxSoft, a mid-sized corporate software company in Bundang. One of his co-workers was confirmed positive for the coronavirus on May 6.

Naver, Korea’s largest internet portal, is located 3 kilometers (1.86 miles) and one subway station away from TmaxSoft. But it has decided to take extra care, its spokesman said. The company initially forced all staff to work from home starting in late February. On April 20, that was eased to allow two days of office work per week.

This transition period was supposed to be over on Monday, when everyone was to return to work as normal. On Sunday, as word of the Itaewon cluster grew, Naver sent messages to staff saying the two-day-per-week working schedule will continue for the time being.

“The measure is an indefinite one until we officially announce updates,” said a Naver spokesman.

Kakao was also planning to resume regular office work on Monday. Its staff had been working from home from late February. On April 9, they started coming to the office once a week.

On Sunday, the company announced the one-day-per-week schedule would be indefinitely extended, citing the jump in Covid-19 patients.

“For staff that visited the specific sites in question, it is obligatory that they work from home,” Kakao said in a statement, referring to clubs and bars where people have been infected. "Those living with a pregnant spouse, senior citizens, patients in need of care or children that can’t go to school are also able to work full-time from home."

As for TmaxSoft, the company indefinitely shut down a research center building near Migeum Station in Bundang starting May 8. Its office space in Yeoksam-dong, western Seoul, and in another building in Bundang were closed down.

Some 86 percent of its 1,600 employees were tested for the virus as of Monday morning. Apart from the two earliest confirmed cases, there were no additional positive cases, the company said.

Apart from around 10 essential staff, all employees have been working from home indefinitely from May 8.

Mobile carrier LG U+ shut down its headquarters building in Yongsan District, central Seoul, for four days starting Monday. One of its staff members visited an Itaewon club on May 2 and was confirmed positive on Sunday. People working on the same floor as that staffer were asked to self-quarantine at home for 14 days.

Several companies in Seoul Square, an office building across from Seoul Station in central Seoul, told staff to work from home starting Monday. A staffer from the French liquor company Pernod Ricard Korea was confirmed positive on Sunday after visiting Itaewon on May 2.

Both confirmed cases at LG U+ and Pernod Ricard had worked in their offices between May 6 and 8 before they were tested.

SK Broadband, an internet company, sent a message to all 1,350 staff working in its headquarters in central Seoul, advising them to telecommute. None of its staffers are linked to the Itaewon cluster, but the company wanted to be extra cautious.