A new coronavirus hot spot in Seoul’s multicultural hub of Itaewon infected 86 people by Monday noon, up from 54 the day before as health officials scramble to track down young partygoers.

The cluster first emerged last Wednesday when a 29-year-old Korean man from Yongin, Gyeonggi, tested positive for Covid-19 after visiting five different clubs and bars in Itaewon-dong, central Seoul, on the night of May 1 and the wee hours of May 2. Itaewon is a commercial area known for its international cuisine and vibrant nightlife, including a gay section, and is also home to many foreigners, including diplomats.

The five establishments visited by the 29-year-old from 11 p.m. to 4 a.m. were King Club, Queen, Trunk, Soho and H.I.M, which are frequented by gay men. Many infections seem to be coming from King Club, where he stayed the longest.

Health officials said they believe the Yongin man was the initial spreader of the coronavirus at the Itaewon clubs, but how he got infected remains a mystery. Authorities said he hadn’t traveled abroad recently, which means he contracted the disease locally. 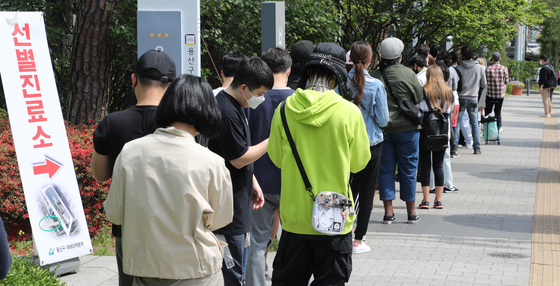 People wait for Covid-19 testing at the Yongsan District Community Health Center, which covers residents of the Itaewon area, the new epicenter of the coronavirus outbreak, in central Seoul Monday. [YONHAP]

The Korea Centers for Disease Control and Prevention (KCDC) said that by Monday noon, 86 people have been traced to the Itaewon cluster, 63 of whom got infected after visiting Itaewon clubs or bars. Most were infected on the morning of May 2 or the next few days. The rest were people who came into contact with the 63, including their friends, relatives and colleagues.

Among the 86 patients, 51 live in Seoul, 21 in the surrounding province of Gyeonggi, seven in Incheon, five in North Chungcheong, one in Busan and another on Jeju Island. Only eight are female and 78 are male. At least 58 people are in their 20s; 18 are in their 30s; three each are in their 40s and 50s; and one each are in their 60s and teens, the KCDC said.

Nearly 35 percent were asymptomatic when they received their positive test results, officials said.

KCDC Director Jung Eun-kyeong said many Covid-19 infections were being traced to people who visited Itaewon clubs and bars from May 2 to 6. Considering the incubation period of the virus, Jung said Korea is likely to see many more cases this week and advised partygoers to get tested at a nearby testing center or call the KCDC’s helpline at 1339.

The Seoul Metropolitan Government advised anyone who visited or “went near” clubs and bars in Itaewon from April 24 to May 6 to get tested even if they aren’t feeling symptoms of the virus.

Prime Minister Chung Sye-kyun said Monday during a meeting of the central government’s Covid-19 command center that if Itaewon visitors fail to cooperate with health authorities, the government will have no other option but to devise “stern measures” against them “for the sake of everyone’s safety,” hinting at possible repercussions.

Korea added 35 Covid-19 infections Sunday, bringing the total case load to 10,909. By Sunday midnight, 256 people had died, the same as the previous day, while 9,632 people have been declared fully recovered, up by 22 from the day before.

Of Sunday’s 35 new patients, six were traced overseas, while the rest were domestic cases. Among Korea’s total 10,909 patients, 1,133, or 10.4 percent, contracted the disease while abroad, mostly in Europe or the United States. 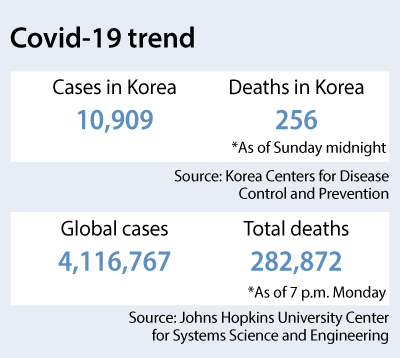 As local government offices try to track down young Itaewon partygoers, the Seoul Metropolitan Government said Monday it has lists of visitors to the five clubs and bars the Yongin man visited — which the establishments kept in compliance with government health guidelines — and they included names and phone numbers.

Some 5,517 people were on the lists compiled by King Club, Trunk, Queen, Soho and H.I.M from April 30 to May 5, but only about 2,000 have picked up their phones so far when officials called them to offer guidelines about a virus test. The rest were said to be either ignoring calls or turned out to be fake numbers.

Some people on the lists may fear their sexual identity will be publicly revealed in a country where gay men often live in the shadows and same-sex marriage is banned.

When the Itaewon cluster first emerged last week, it prompted a social media backlash against the local gay community, somewhat similar to the furor against the Shincheonji religious cult in mid-February when a hot spot was discovered at a church building in Daegu.

Some 5,200 infections in Korea have been traced to the Shincheonji organization to date, accounting for nearly half of the country’s total cases.

In a radio show Monday morning, Seoul Mayor Park Won-soon assured gay men they won’t have to reveal their sexual orientation during testing, stressing “there’s no reason” for the government to disclose that information to the public.

Gyeonggi Gov. Lee Jae-myung chimed in, saying, “If you tell us you’ve been to Itaewon, we’ll just test you. You can get tested without revealing your sexual orientation.”

“If you hesitate for a single day, everyone’s lives may come to a halt for a whole month,” said Yoon. “For those who need to get tested, please do so.”

In case anyone holds out, Seoul officials vowed to cooperate with the police to go over CCTV footage from the five clubs, their credit card transactions and other digital contact tracing methods to get in touch with customers.

A so-called “sleeping room” in Gangnam District, southern Seoul, named Black, has also been named a possible cluster of Covid-19 infections after the district office said Sunday that two male visitors from Gyeonggi tested positive for the virus after visiting Black on May 4. The establishment has been identified by several local media outlets as a gay sauna.

A man in his 30s from Anyang and another man in his 20s from Yangpyeong County were said to have visited an Itaewon club early this month and went to Black on May 4, staying from 12 to 8 a.m.