Incheon airport charging station to be built for buses

Incheon airport charging station to be built for buses 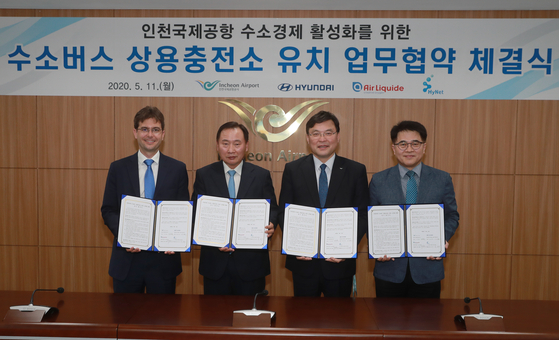 Hyundai Motor will build a charging station for hydrogen-powered electric buses at Incheon International Airport by March next year.

Under the agreement, Hyundai will pay some of the costs for establishing the charging station and offer repair services after it’s complete. Incheon International Airport will provide the land. Air Liquide Korea, a Paris-based supplier of industrial gas, will be providing equipment and supplying hydrogen.

The corporation is planning to replace all of its old shuttle buses running inside the airport to hydrogen-powered vehicles over the next five years. These buses connect terminals, parking lots and logistics centers. Seven hydrogen-powered buses will be brought into service in the second half. From there, three to five new vehicles will replace old ones each year.

Hyundai has been expanding partnerships in an attempt to expand the use of hydrogen-powered vehicles. Its partners include those with Switzerland-based H2 Energy, France’s Engie, Saudi Arabia’s Aramco and Cummins from the United States. Last month, the company signed a memorandum of understanding with the Seoul city government to cooperate in expanding the use of hydrogen-powered vehicles in the city.