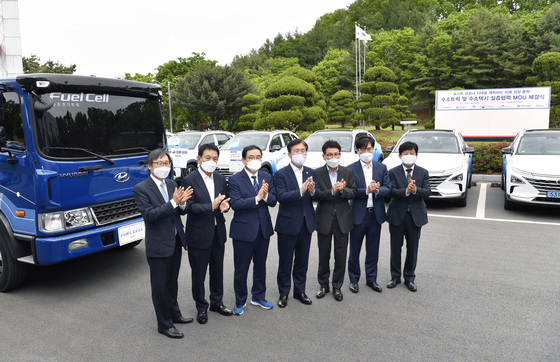 Trade Minister Sung Yun-mo, far left, and Hyundai Motor Group President Kong Young-woon, second from right, pose next to the fuel-cell truck that will be sent to the city of Changwon, South Gyeongsang, at the Korea Automotive Technology Institute in Cheonan, South Chungcheong, on Thursday. [YONHAP]


A truck powered by a fuel cell will collect garbage in Changwon, South Gyeongsang, while more hydrogen-powered taxis will operate in Seoul.


Hyundai Motor said it agreed to provide the necessary zero-emissions vehicles with its participation in a multi-party pilot project formed Thursday to invigorate the fuel-cell vehicle business in Korea.

The carmaker said Thursday it signed a memorandum of understanding with the Ministry of Trade, Industry and Energy, Changwon city government and the Korea Automotive Technology Institute among others where it agreed to provide hydrogen-powered vehicles for test operations.

The Industry Ministry promised on Thursday to provide the necessary budget for the projects while further supporting research dedicated to enhancing the functionality of the fuel-cell trucks.

The five-ton truck that will be distributed to Changwon can drive up to 599 kilometers (372 miles) per charge under an average speed of 60 kilometers per hour. The city government of Changwon said it will establish necessary infrastructure such as hydrogen charging stations this year.

Hyundai Motor said the latest pilot project will pave the way in replacing other types of commercial trucks such as those used for road cleaning and water sprinkling with hydrogen-powered models in the future.

Ten more hydrogen-powered Nexo SUVs will be provided as taxis in Seoul with a goal of testing the durability of the fuel-cell stacks as taxis tend to drive farther per day compared to individually-owned vehicles.

In cooperation with the Korea Automotive Technology Institute, Hyundai Motor will collect monitoring data on the operation of Nexo taxis to improve the car’s quality.