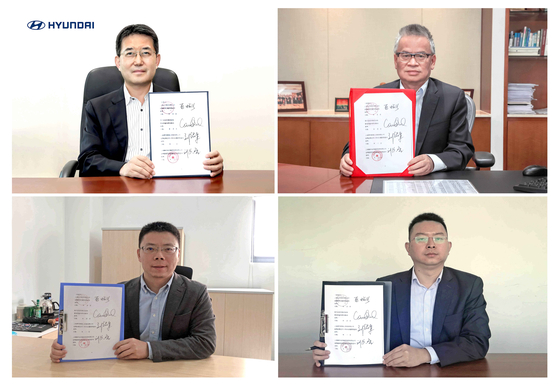 
Hyundai Motor aims to supply some 4,000 hydrogen-powered vehicles to China by 2025 through two partnerships with local energy and electricity corporations as the automaker sees the region as an important market as the fuel cell industry grows.

The area refers to a triangle-shaped megalopolis generally consisting of the Wu Chinese-speaking areas of Shanghai, southern Jiangsu Province and northern Zhejiang Province, holding a reputation as a hub for commerce and international trade.

The carmaker will lease or sell the clean energy trucks to local logistics companies.

Shanghai Electric Power is responsible for investments into charging stations while Shanghai Sunwise Energy Systems will take on building and maintaining the locations.

In a separate case announced the same day, the automaker signed a partnership with Advanced Technology & Materials, a subsidiary of China Iron & Steel Research Institute Group, and HBIS Industrial Technology Service, to have 1,000 fuel cell trucks on the road by 2025 in the Jing-Jin-Ji metropolitan region.

As a designated economic zone, the region covers Beijing, Tianjin and Hebei in North China.

The area is home to many steel makers, which will likely boost demand for large-sized fuel cell trucks.

“China is one of the most promising markets,” said Lee In-cheol, executive vice president and head of the commercial vehicle division at Hyundai Motor.

“We will set up a comprehensive business cluster for hydrogen trucks that not only addresses sales but also leasing and the operation of charging stations."

The Chinese government is pushing for a hydrogen economy, with an aim of placing 1 million fuel cell vehicles on the roads by 2030.

The Korean carmaker is also betting big on hydrogen cars, hoping that it will sell 27,000 fuel cell vehicles globally by 2030.

[INTERVIEW] SsangYong Motor hoping for hit with Torres in Chile