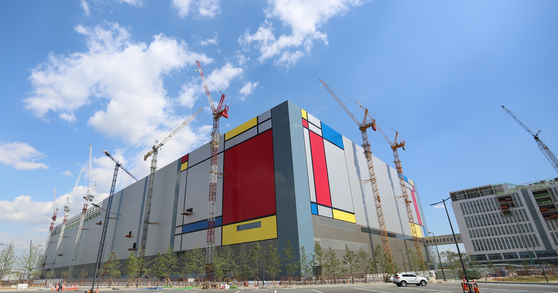 
Construction of a Samsung Electronics chip production line in Pyeongtaek, Gyeonggi, was halted after a worker there tested positive for the coronavirus.


The company said that the case won’t affect the operation of an existing semiconductor facility at the site.

The 33-year-old man, who the company said is not linked with the Itaewon club cluster, is an employee of Samsung C&T. He was found to be infected on Wednesday night after visiting his hometown in Hanam, Gyeonggi. Samsung C&T and Samsung Engineering are building the memory chip plant, dispatching a total of 20,000 workers.

No date has been set for a restart of the plant.

The headquarters of Sempio Foods Company in central Seoul was shut on Thursday after one of its employees was found to be infected with the coronavirus.

The employee of the food company visited the Itaewon area during the holiday period in early May.

Hospitality booking app Yanolja reported one infection at its headquarters in Gangnam, which led to a shutdown of the building, which is used jointly by TMON, an e-commerce company.

Workers from both start-ups were ordered to leave the office early Wednesday.

Faced with the increasing fear of a second wave of the pandemic, SK Telecom is extending at-home work measures through May 24.