“My strong will to visit Korea this year remains unchanged,” Xi was quoted as telling Moon. 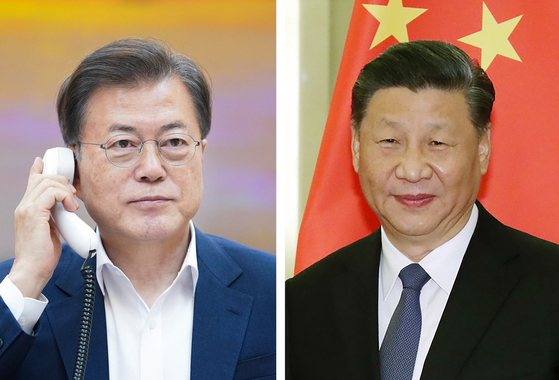 According to Moon’s spokesman Kang Min-seok, the two countries agreed to consultations to plan Xi’s visit after the coronavirus outbreaks are stabilized. “Xi’s visit is most important to Korea-China relations,” Moon told Xi, Kang said in a press statement.

The phone call was requested by Xi and lasted 34 minutes, starting at 9 p.m. Wednesday, Kang said. It was the two leaders' fifth phone conversation since Moon took office. The last one took place on Feb. 20.

China’s state-run media also reported Xi’s phone conversation with Moon on Thursday. While the Blue House stressed that Xi reaffirmed his intention to visit Korea this year, that point was conspicuously missing from reports in such Chinese media as the People’s Daily.

During a summit in Beijing last December, Moon asked Xi to visit Korea in the first quarter of 2020. When the two countries started discussing a schedule at the beginning of this year, Xi was expected to visit Korea in March. The coronavirus outbreak got in the way.

In February, Presidential Chief of Staff Noh Young-min said Xi was scheduled to visit during the first half of this year, indicating that the visit would take place before the end of June.

The pandemic put a serious damper on Moon’s efforts to improve ties with China using Xi’s trip as a turning point. Bilateral relations with China have been chilly since the U.S. deployment of the Terminal High Altitude Area Defense (Thaad) antimissile system in Korea in 2016.

Xi has yet to reciprocate a visit to China by Moon. He last visited Seoul in July 2014.

According to the Blue House, Xi praised Moon’s strong leadership of the response to the viral outbreak in the phone call. “The two countries are good neighbors, and we have become examples of international cooperation in disinfection,” Kang quoted Xi as saying.

Moon congratulated Xi for the fact that China's outbreak is under control enough that it can hold the National People's Congress and Chinese People's Political Consultative Conference next week. The events were originally planned for March but postponed to May 21 and 22.

According to the Blue House, Xi and Moon also discussed the importance of maintaining bilateral exchanges. Xi praised the recently introduced fast-track visa system as a symbol of the countries’ strong relations, saying, “You do not exchange a good neighbor even for gold.”

Earlier this month, the two countries agreed to ease quarantine requirements for some business travelers to revive economic exchanges disrupted by the coronavirus pandemic. Under the fast-track visa system, Korean businessmen will be able to visit 10 Chinese regions after going through minimal health screening and quarantine measures.

“We hope the fast-track system will be expanded to other travelers and destinations,” Moon told Xi.