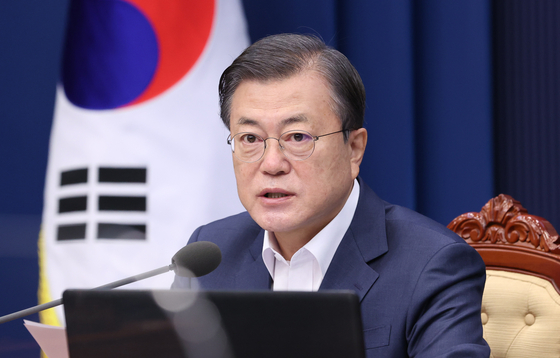 
President Moon Jae-in will participate in a virtual summit with the Asia-Pacific Economic Cooperation (APEC) countries Friday night, during which he plans to discuss Korea’s experience and strategy in fighting the Covid-19 pandemic.

“Through his speech, Moon will share Korea’s experience in preventing and controlling the spread of Covid-19 infections,” Park Bok-yeong, Moon’s presidential advisor for economic affairs, said. “Moon will also discuss Korea’s contribution to the international community to develop cures and vaccines and offer humanitarian assistance.”

Moon will highlight Korea's cooperation with international organizations, Park said, noting that the country has offered humanitarian aid worth over $100 million. Moon will also promise further contributions to the global community to end the pandemic.

According to Park, Moon plans to urge the APEC leaders to speed up their discussions to resume travel of essential personnel. Moon seeks to create a system to restore the ability of businessmen to travel, particularly within the APEC region.

Aiming to boost a multilateral trade regime, APEC first started ministerial meetings in 1989 with 12 countries. In 1993, the group started holding an annual summit of state leaders. Malaysia is the rotating chair for this year.

At the summit, participating leaders will discuss various economic cooperation including measures to fight the pandemic, along with trade and investment.

Malaysia said it will try to adopt a joint statement among the participating leaders at the end of the summit. It also prepared a new future vision for the APEC, which will stipulate the group’s plans for the next 20 years.

Moon to participate in virtual G20, APEC summits this week