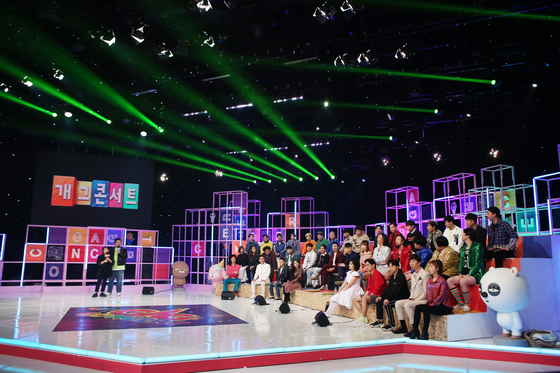 After 20 years, the iconic comedy show "Gag Concert" on KBS will be taking a break, the channel announced on Thursday. [KBS]


The iconic comedy show “Gag Concert” on KBS is not disappearing, but it will be taking a break, the public broadcaster confirmed on Thursday afternoon.

Last week, local media outlet Munhwa Ilbo, reported that the show would soon “disappear into history” after a taping on May 20. However, program officials denied the report.

“Due to various reasons such as changes in the broadcast environment, comedy trends and the limits of an open comedy show, the program will be taking a brief break for a renewal,” KBS said in an official statement. However, the show's producers did not clarify when the show will be coming back.

Meanwhile, the comedians that make up the show's cast will instead appear on the KBS comedy YouTube channel “Bbuntastic” to try out new forms of comedy.

"Gag Concert" first aired on Sept. 4, 1999, and it is the longest-running comedy show in Korea. It has been a launching pad for the careers of famous comedians such as Kim Jun-ho, Jung Hyung-don, Lee Su-geun, Yoo Min-sang, Kim Jun-hyun and more. Due to the program’s low ratings, the show was moved from Saturday nights to Friday nights in April. However, the show’s ratings continued to falter. The show's latest viewership rating was 2.5 percent.