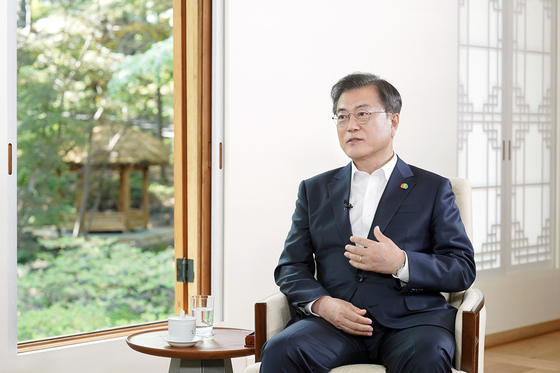 President Moon Jae-in speaks at the Blue House in an interview on the May 18 Democratization Movement in Gwangju on Sunday, the eve of the 40th anniversary of the uprising. [NEWS1]

President Moon Jae-in stressed Sunday the need to reveal the truth about who ordered the use of military force against civilian pro-democracy protesters in Gwangju in May 1980.

Moon said in an interview that aired on MBC on the eve of the 40th anniversary of the May 18 Democratization Movement in Gwangju, which falls on Monday, “It has not been revealed who ordered to open fire and who holds the final legal responsibility for it.”

"We have to identify all the victims of the massacre and fully uncover how the helicopter shooting was carried out and a massive operation was carried out to conceal and distort the truth,” he added.

President Moon ordered a special investigation in 2017, soon after he took office, into unanswered questions about the massacre of civilian protesters by then Gen. Chun Doo Hwan’s junta during the Gwangju uprising between May 18 and 27, 1980. This included reports that soldiers were ordered to fire at protesters from a helicopter and that fighter jets armed with bombs were ready to support the crackdown.

While the official death toll was 193, hundreds more were believed to be killed and injured by armed soldiers during the protest.

An independent fact-finding committee was formed last week. The May 18 Democratization Movement Truth Commission is tasked with investigating who was responsible for the use of military force against civilians protesting Chun’s junta. Chun took power in a military coup after the assassination of President Park Chung Hee in October 1979.

Moon told MBC that the goal of the probe is “not necessarily just to legally punish those who are responsible, but because the basis of truth is necessary in order to find the true path toward reconciliation and unity.”

He added that there are “high expectations” on the probe and that the government will actively support its efforts.

Moon also said that the spirit of the May 18 Democratization Movement should be reflected in the Korean Constitution in the future.

Moon noted that the March 1 Independence Movement of 1919 against Japanese colonial rule and the April Revolution, mass pro-democracy protests against the authoritarian President Syngman Rhee in 1960, are both referred to in the preamble of the Korean Constitution. However, he noted that the movement in April 19, 1960, is not enough to cover the full extent of the democratization movement in the country.

The May 18 Democratization Movement later became the driving force for the nationwide June Democracy Movement of 1987. Moon said that there if there is an amendment to the Constitution, such language referring to the movements should definitely be included.

He said these movements reflect a “democratic ideology that we should pursue and pass on” and that “the history of our democratic movement will be properly expressed when they are included in the Constitution.”

Moon added that the candlelight vigils in 2016 which eventually led to the impeachment of former President Park Geun-hye in 2017 “brought about our government today.”

But he said it is “too early” to include language about the candlelight vigils in an amendment to the Constitution, which could be a politically controversial issue.

Moon said that the Gwangju uprising especially made him recollect late President Roh Moo-hyun, who at that time was a lawyer and spread awareness of the democratic movement in Busan.