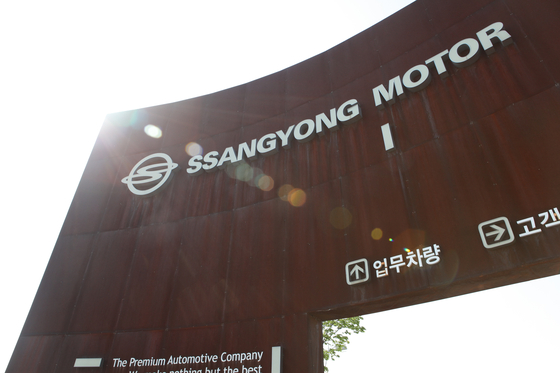 SsangYong Motor's auditors have refused to sign off on the carmaker's quarterly report citing “uncertainty about the company’s existence in the future.”


“The company’s quarterly financial statement has been made under the premise that the company’s debt can be redeemed through normal business operations,” KPMG Samjong wrote in the company's quarterly report released May 15 in which it said it could not issue an opinion on the SsangYong Motor's financials.

“However, the company has been suffering from deteriorating financial conditions. The company’s liquid liabilities exceed liquid assets by 576.6 billion won [$467.1 million]. Under such a situation, it is questionable whether this company could exist in the future.”

The lack of an audit opinion on quarterly reports has no immediate effect on a company, but if the company can not get its year-end books signed off by year, the stock exchange may start the delisting process. A company can appeal to the Korea Exchange about delisting, which in most cases earns them one additional year to demonstrate improvement.

“We are going to focus on normalizing the business such as releasing new models in Korea in the latter half of the year as well as in overseas markets,” Choi Jin-woong, spokesman for the Korean carmaker, said. “We are also going to improve the company’s liquidity by selling non-core assets as well.”

SsangYong reported an operating loss for a 13th consecutive quarter in the first three months of this year, posting a 98.6 billion won operating loss. Its quarterly car sales dropped by 30 percent on year — to 24,139 units. Its net loss expanded 641.3 percent from 26.1 billion won to 193.5 billion won over the cited period.

Over the past couple of months, ever since its parent company Mahindra & Mahindra scrapped its initial 230 billion investment plan, SsangYong Motor has wheeled out all manner of plans to reduce losses and resolve the liquidity crunch. Mahindra only agreed to provide one-time emergency funding of 40 billion won.

In April, the struggling carmaker was able to secure 20 billion won by selling one of its logistics centers in Busan and is in negotiation to sell more of its non-core assets, although which assets have been put up for sale haven’t been revealed yet.

If sales are not achieved fast, SsangYong Motor will face another crisis in July when its 90 billion won loan from state-run Korea Development Bank comes due. By the end of the year, SsangYong has to pay off a total of 250 billion won to the bank.

As a last resort, the auto company plans to start selling a revamped Tivoli Air and G4 Rexton in the latter half of the year in Korea. SsangYong Motor stopped selling the Tivoli Ait last June due to weak demand.

Additional commitment of funds from its parent company is unlikely. In India, which has been on lockdown since March 25 due to the coronavirus, not a single car was sold in April, according to Society of Indian Automobile Manufacturers data. Mahindra sold zero units in the country in April while exporting a mere 733 units.

SsangYong Motor objects to its delisting