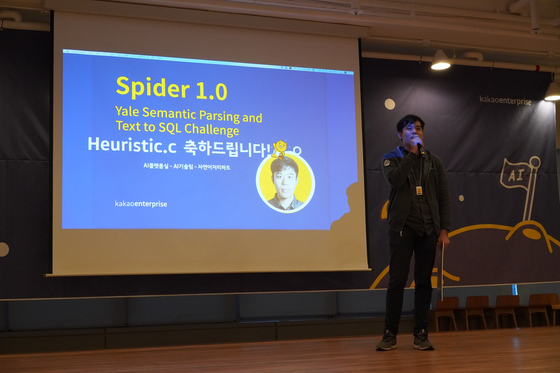 
Kakao has recently racked up some awards in machine-learning competitions, which the company is touting as proof of its expertise in the emerging market.


Kakao Enterprise, Kakao's artificial intelligence (AI) subsidiary, ranked third in one of the sections on the international Face Recognition Vendor Test (FRVT) according to the latest leaderboard updated in March. Organized by the National Institute of Standards and Technology, FRVT is a competition that measures the performance of machine-learning algorithms that distinguish faces.

The test is conducted on an ongoing basis for companies to submit algorithms to the institute, so the leaderboard is subject to change. More than 200 global AI facial recognition companies including Intel, Tencent, SenseTime and Megvii have participated in the competition. Among many categories in the "1:1 verification" section — including visa images, application images, border crossing images, mugshot images and wild images — Kakao Enterprise participated in wild images datasets.

Kakao Enterprise is ranked third in the "Wild" 1:1 verification section on the Face Recognition Vendor Test (FRVT) as of March. [KAKAO]


"This [1:1 verification] technology is used a lot in everyday life, such as Apple iPhone's Face ID and immigration procedures," said Shin Jong-joo, an engineer at the company. "It is important to lower the misrecognition rate, which recognizes different faces as the same."

Kakao Enterprise is currently ranked third at the ongoing Spider 1.0 Yale Semantic Parsing and Text-to-SQL Challenge, hosted in February at Yale University in the United States. The competition requires entrants to develop algorithms that efficiently search databases within companies. Similar to searching for documents with limited keywords online, the algorithm enables users to find the information they need among the vast amount of company data.

The company said it is emphasizing AI technologies as the market is growing rapidly and is expected to generate substantial revenue. 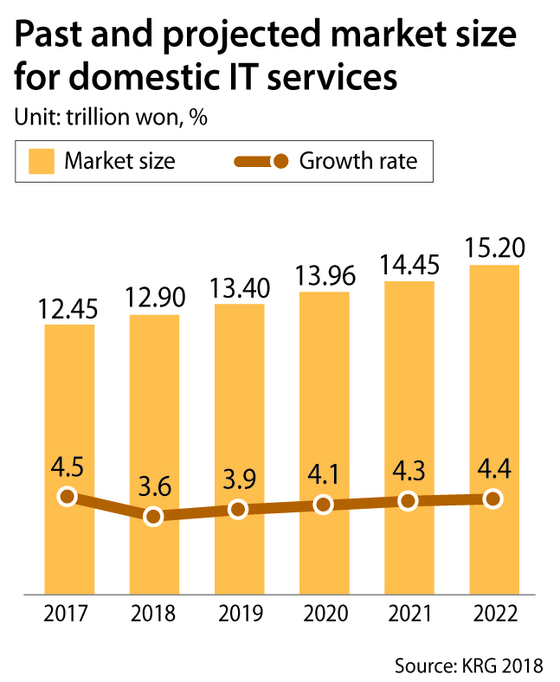 
Market research firm KRG predicted the size of the local IT services market will grow from 12.45 trillion won ($10.16 billion) in 2017 to 15.20 trillion won in 2022. As of last year, the global market is estimated to be worth $1.48 trillion, according to a survey conducted by Gartner, a U.S. IT consulting company.

The software industry is becoming like the automobile industry, specializing in different auto parts. In the past, all elements in the program were created on their own. But recently it has become common to include already-developed programs in the larger project, like auto parts.

"Just as celebrity chef Baek Jong-won doesn’t grow all the ingredients himself to cook his dishes, the engineers do the same when developing app services," said CEO Kang Seong-ji who developed a smart belt, WELT. "It is now common to create a new service by combining payment systems and chat services that other companies have already developed."

"As cloud computing services became more common, the corporate software market providing cloud services is also growing," Kim Do-hyun, a professor of business administration at Kookmin University, said. "It is better to use others' technology in terms of cost, efficiency and quality management."

Kakao is focusing on the AI software market for corporations. Kakao Enterprise has been taking active steps since it gained independence from Kakao in December by signing memorandum of understandings with 12 companies.

"I thought we would be able to achieve significant results if we make a digital transition by providing other companies with innovative services that Kakao has been built for the past 10 years," Baek Sang-yeop, CEO of Kakao Enterprise, said. "The goal is to accumulate more successful collaboration cases and compete with global firms in the future."

Kakao forms panel to monitor and advise on tech ethics