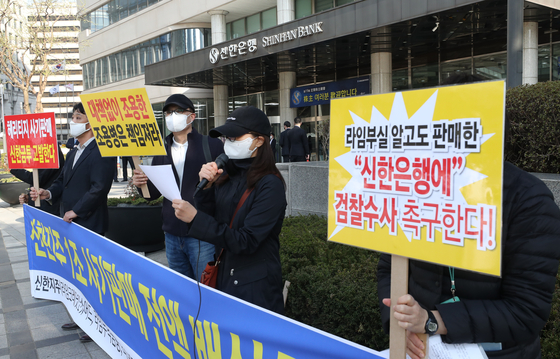 Investors who suffered losses due to problematic funds from Lime Asset Management holds a demonstration in front of Shinhan Bank’s headquarters in March demanding compensation of losses and a thorough investigation against Shinhan Investment. [YONHAP]


Shinhan Investment on Wednesday announced it will return at least 20 percent of the principal to investors who lost money in the problematic funds managed by Lime Asset Management.


The investment firm's board of directors, who made the decision Tuesday, also pledged to conduct a major overhaul of its internal management systems to prevent similar incidents from happening in the future.

Last July, Lime suspended four of its sub-funds due to liquidity issues, eventually freezing withdrawals of 1.67 trillion won ($1.36 billion) in assets. The Financial Supervisory Service estimated in February Lime’s asset value had dropped by about half, while some of its sub-funds had gone to zero and were effectively worthless.

Shinhan is the second financial institution to offer compensation to its customers, following in the footsteps of Shinyoung Securities.

For customers who invested in Lime funds that were tied to domestic assets, including Pluto FI D-1 and Tethys 2, Shinhan’s compensation plan calls for returning 30 percent of the losses generated.


Those who invested in Lime’s trade finance funds, including Pluto TF-1, will receive back a portion of their principal depending on the type of the fund. For open-end funds, which can be resold voluntarily, Shinhan will compensate 30 percent of the principal. For investors in closed-end funds, the brokerage will compensate 70 percent.

"The compensation rate for the two types of funds were set differently since we failed to properly explain the details of closed-end funds to our investors," Shinhan Investment said in a statement.


Shinhan Investment said it has instituted internal changes to prevent similar incidents from happening in the future.

The company said Wednesday it will downsize its private brokerage services and partially suspend sales of new funds for the foreseeable future. The investment group also plans to form a special division that will be responsible for risk management and assessment.

“We plan to overhaul our management system to prevent a recurrence of accidents. We will increase the number of financial investments verified by internal professionals and come up with new standards to manage external asset management agencies,” said Lee Young-chang, president of Shinhan Investment.


Lime Asset Management is the largest hedge fund company in Korea, with total assets at one time valued at 5 trillion won.