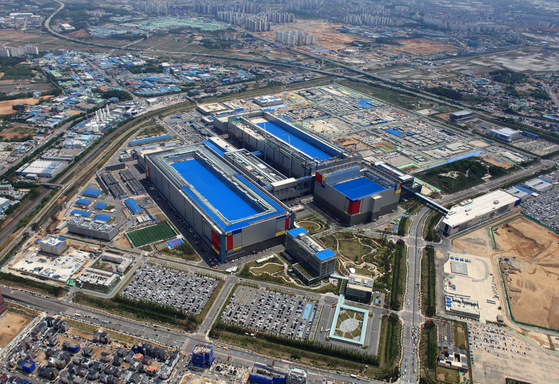 
Samsung Electronics will boost foundry capacity with a new production line at its Pyeongtaek plant in Gyeonggi, the chipmaker announced Thursday.


The new foundry line will focus on producing 5-nanometer chips using extreme ultraviolet (EUV) lithography — a manufacturing process that can print nodes of less than 10 nanometers in width.

The project is part of the company's goal to become a world leader in logic chips and the foundry business by 2030. Logic chips generally refer to semiconductors that can process data like central processing units or graphics cards, as opposed to memory chips that store data. Chip foundries specialize in manufacturing semiconductors based on client contracts.

Construction on the expansion started earlier this month and is expected to reach full operation in the second half of 2021, Samsung said in statement.

Samsung did not say how much it invested in the new Pyeongtaek line, but analysts and industry watchers guess the project cost around 10 trillion won for construction and purchasing manufacturing equipment.

Samsung is an undisputed global leader in memory chips for both DRAM and NAND, but its presence in other semiconductor segments has been relatively weak. In the foundry business, the Korean company is the second-largest behind Taiwan’s TSMC, but with a wide gap of 15.9 percent market share versus Taiwan Semiconductor Manufacturing Company's (TSMC) 54.1 percent, based on a TrendForce analysis of first-quarter revenues in 2020.

EUV lithography sits at the center of Samsung’s strategy to reduce that gap.

At the moment, TSMC and Samsung are the only two companies in the world that can use EUV technology in chip production.

Over the past few years, Samsung has been gearing up its EUV-based production facilities. After starting mass production of EUV-based 7-nanometer processes last year, the company added another EUV-dedicated line, the V1, in Hwaseong, Gyeonggi, on February of this year.

“This new production facility will expand Samsung’s manufacturing capabilities for sub-5-nanometer processes and enable us to rapidly respond to the increasing demand for EUV-based solutions,” said ES Jung, Samsung Electronics President and head of Foundry Business.

The company added in a statement that it expects the global foundry market’s growth to be led by 10-nanometer processes alongside the demand increase of applications for 5G networks, high-performance computing and artificial intelligence.

In an October report, market research firm IC Insights forecast that chips with nodes of 10 nanometers or less will account for 25 percent of global chip production by 2023, from 5 percent in 2019.