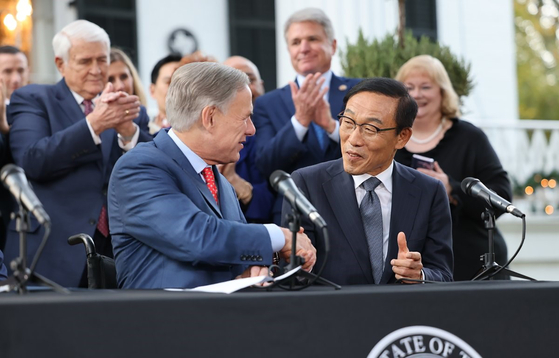 
Samsung Electronics selected Taylor, Texas, as the location for its $17 billion U.S. chip investment, a key move in the company's battle to compete with Hsinchu, Taiwan's TSMC in the manufacturing of high-performing processors.


The deal was announced Tuesday in the United States during an event attended by Texas Gov. Greg Abbott and Samsung Electronics Vice Chairman Kim Ki-nam.


Samsung Electronics plans to break ground at the site – located some 50 miles from its existing chip plant in Austin - in the first quarter of 2022 with the aim of commencing operations in the final quarter of 2024.


"As we add a new facility in Taylor, Samsung is laying the groundwork for another important chapter in our future," Kim said during the event, which was held in Austin. "With greater manufacturing capacity, we will be able to better serve the needs of our customers and contribute to the stability of the global semiconductor supply chain."


It will be the largest single investment by Samsung Electronics in the United States, according to a statement from the company.


The City of Taylor issued a statement detailing the massive spending.


“Samsung is planning on investing $17 billion in land, buildings, equipment, and other personal business property for the project, which will include $6 billion in buildings and other real property improvements, $11 billion in machinery and equipment, and the purchase of more than 1,000 acres of land for the 6 million square foot semiconductor manufacturing facility,” the statement read.

Taylor, a semi-rural area with a population of about 18,000, is known for its barbecue and has frequently been used as a site for the filming of movies.


The existing Austin factory, opened in 1996, fabricates chips primarily used in conventional home appliances. The chip manufacturer also runs production facilities in Xian, China, for memory chips, but the manufacturing process there is not considered cutting-edge and doesn’t employ EUV machines. Its most advanced semiconductors are produced in semiconductor complexes in Korea, where the company runs production lines in Pyeongtaek and Hwaseong, Gyeonggi.


“Samsung Electronics will likely manufacture upcoming 3 nanometer chips in the new factory instead of 5 nanometer chips currently in production since the company noted that the site will be used for advanced chip products,” said Jeong In-seong, a semiconductor specialist who authored a book “The Future of the Semiconductor Empire.”


Samsung Electronics stated in an application for tax incentives that the facility in Taylor will be used for its foundry, or contract fabrication, business and will primarily supply to large U.S. clients, including Qualcomm, Nvidia, IBM and Tesla.


The decision by Samsung Electronics marks a major win for the Biden administration, since the U.S. government is pushing to bring chip production to U.S. soil in an effort to insulate itself from a shortage of chips and possible conflict in Asia.


U.S. Senate passed the “CHIPS for America Act” earlier this year to subsidize domestic semiconductor research, design and production. At the same time, the administration has kept pressuring the chipmakers to ramp up production in the U.S. through events like the “chip summit.”


“The U.S. has used carrots and sticks for chipmakers, which prompted Samsung to make the decision,” Jeong said.


The announcement comes after months of market speculation about exactly where the plant would be located and when the company would make its decision. Another location in Texas has been under consideration, while New York state and Arizona were also mentioned.


Texas has become a leading destination for big name companies. Tesla plans to shift its headquarters from Palo Alto, California to Austin, while Hewlett Packard Enterprise and Oracle have already moved to the Lone Star State.


Intel and TSMC are making their own multi-billion dollar semiconductor investments in the United States and are slightly ahead of Samsung Electronics in getting their projects started.


Intel recently broke ground on two new chip-making plants in Arizona, projects to which it will be committing $20 billion. TSMC started construction of a $12 billion chip factory in Arizona in April and may build a chip plant in Japan jointly with Sony.