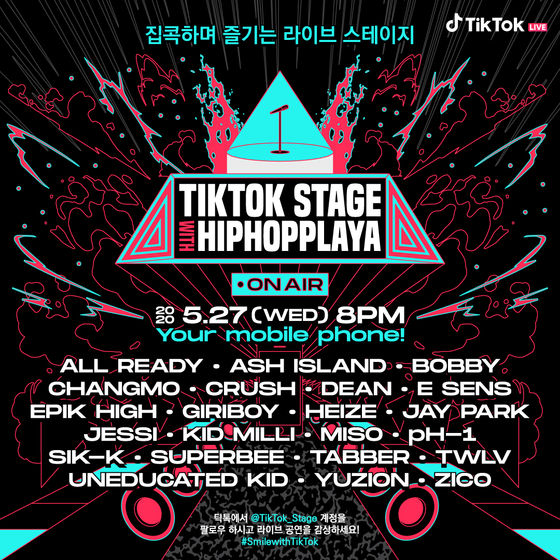 Earlier this week, video-sharing social media platform TikTok announced that it would be hosting a K-pop concert for home-bound fans to enjoy next week. One day later, TikTok added a hip-hop show to the mix.


According to TikTok, it will hold an online hip-hop music concert in collaboration with Korea's biggest hip-hop festival Hiphopplaya on May 28 at 8 p.m., two days after the K-pop concert "TikTok Stage Live From Seoul" takes place.

Both events are a part of TikTok's "#smilewithTikTok" project to help spread a message of hope and love to the world during these uncertain times.

For the project, TikTok will calculate the total number of viewers and donate $0.50 per person to the Community Chest of Korea.

Hiphopplaya was initially set to take place from April 25 to 26 at the Nanji Hangang Park in western Seoul, but canceled its spring show due to the virus outbreak and has not confirmed a new date yet.

"TikTok Stage with Hiphopplaya" will begin at 8 p.m. on the TikTok account @tiktok_stage.