LONDON - You can float a grey cloud inside your room and let raindrops fall from it; you can spread a shimmering aurora borealis over the walls of your bedroom; you can have a golden sun appear and rotate inside your living room at midnight – in the new augmented reality (AR) work developed by the world-famous artist Olafur Eliasson in collaboration with the AR/VR platform Acute Art.


The Danish artist unveiled his first-ever AR work named ‘Wunderkammer’ on May 14 on Acute Art's mobile application, a reflection of the effect the Covid-19 pandemic has had on the acceleration of the digitalization of the creation and the exhibition of art. To experience the new work, people only have to open the app, select the images of elements, like the sun or clouds, that they want and then click the coordinates so that the elements can be located in the space on the mobile screen.

The collection of elements in ‘Wunderkammer’ include ‘Little Sun,’ Eliasson’s solar-powered lantern that he developed for people in remote areas suffering from a shortage of power supply. Most of the other elements are atmospheric phenomena and living creatures such as a rainbow, flowers and a puffin, in accordance with Eliasson’s renowned work as an artist who invites simple natural elements like light and water into his pieces to create wholly new perceptions of them.

The title ‘Wunderkammer’ originates from a word that referred to old European aristocrats’ and scholars’ private collections of diverse, unique items that ranged from minerals to arts and crafts. Acute Art said in a press release, “Historically, the Wunderkammer composed a world out of the ordinary by juxtaposing unique objects (…) that expanded the boundaries of knowledge (…) Eliasson’s interest in the Wunderkammer centers on it being a model for collecting and for probing the limits of knowledge, allowing us to question what we know.” 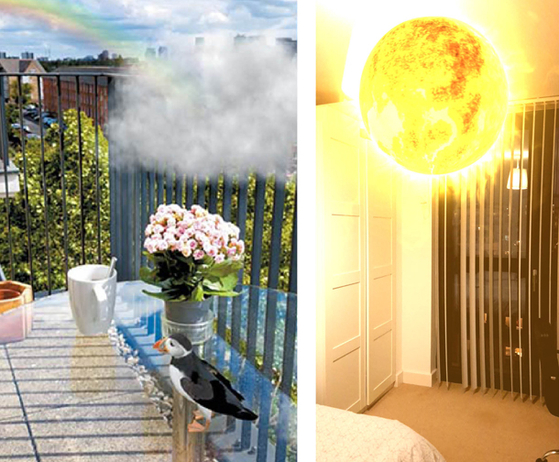 A cloud, rainbow and puffin and a sun created in the reporter’s London home through the use of the Wunderkammer app hosted by Acute Art. [MOON SO-YOUNG]


“To question what we know” resonates further in the unprecedented coronavirus outbreak. The Korea JoongAng Daily had an e-mail interview with Eliasson to ask about this work and the future of art and society after the pandemic.


Some experts say our life may never return to “normal,”  the way it was before the coronavirus pandemic. One of the major changes is having a more digitally-connected life. It means that the creation and exhibition of artwork could become virtual. How do you feel about that prospect? And what about your work? Will you focus more on creating digital pieces?


It’s true that the current health crisis has brought our societies close to a halt. I believe it is important that we now take the time to empathize with all those struck by the crisis and also see this as a chance to imagine together the earth that we want to inhabit in the future. Even the phrase the ‘world as we know it’ is now of the past. This is true of everything we do, so it is also going to affect how we make and share art. That being said, I have made a number of digital works over the years, including my VR work ‘Rainbow’ which I made with Acute Art in 2017, and I do think AR is not just about technology, but also about defining our working processes, how we live and communicate, and these experiences too can be very meaningful.

Your works have been related with the philosophical idea of phenomenology. You have always exposed the mechanisms behind your artwork to the audience, to show that reality is constructed instead of existing objectively. Do you think that your new work Wunderkammer has no difference fundamentally from tangible reality in the conventional sense?

While augmented reality relies on a technological trick and is at essence a mediated experience — we look at it through the screen — I think it has the potential to make explicit what is overlooked in the world around us, to urge us to look at the other things that are actually in the space anew, to see them as contingent and constructed as well. The work I have been developing with Acute Art over the last few months challenges our perception of what is physical and digital. How does one capture light in augmented reality — or capture natural phenomena for that matter? A number of elements are much more experimental, such as light sculptures and objects that seem invisible to the eye. So in this sense, I am interested in these differences — and our perception on what is known and unknown.

Which element in Wunderkammer do you have the strongest attachment to?

I have enjoyed working with Acute Art to develop a number of different elements for Wunderkammer that capture a variety of different objects that have great meaning for me. Of course I like them all, but there is something very funny about the little puffin. A reminder for me of Iceland, which has one of the world's largest colonies of puffins.

In the past, the cabinets of curiosities in Europe expanded the boundaries of knowledge, however, they also exploited nature and exposed looted non-European cultural objects. It seems that Wunderkammer collects and helps widen knowledge without exploitation and physical possession, while being shared by many people. I love it. However, there are still many people around the world, who cannot afford to approach your works, like the people for whom you created 'Little Sun.' What are you thoughts about that?

I know from my travels in Ethiopia and my work with Little Sun that aesthetics are as important to those without money as they are to those with it. We all wish to have beauty and wonder in our lives. This also has to do with a notion of culture, which I believe is broader than what we mean when we talk about the art world. There is a huge spectrum of artists working across different countries, levels of wealth, class and gender, and access and visibility is by no means equally distributed.

How my art can be reached by as many people as possible is something I constantly consider, which is why producing catalogues, making material available online and engaging in social media are so important to me. 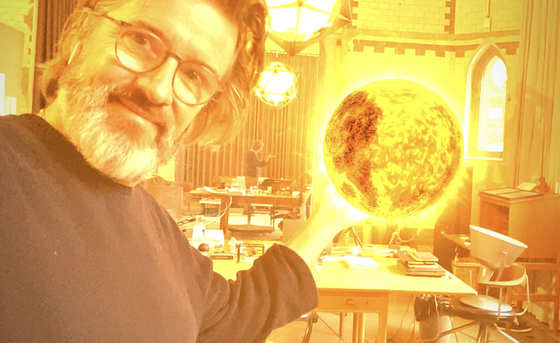 Eliasson creates a sun in his studio. [OLAFUR ELIASSON, WUNDERKAMMER, 2020]

How has your work and personal life been impacted by the coronavirus pandemic?

Just like most people, I have been dealing with the impact of the virus on my way of life and working. At my studio in Berlin, we reacted quickly to this challenge by adopting alternative ways of working. I am thankful for the speed at which the German government has acted to the situation here to support culture, which has enabled me and the team at the studio to continue to work on projects throughout this moment. It’s been a long time since I spent a whole month in a single place, so it has given me time to slow down and think, provided me more time to read and reflect. It’s also meant finding other ways of exhibiting that don’t require people to share a space physically. Most recently, I launched a participatory artwork Earth Perspectives with The Serpentine Galleries on the occasion of Earth Day. The work shows nine different images of Earth in reversed colors, so that if you look at them a while, an afterimage remains in your eyes in the actual colors of our blue planet. In this sense, the viewer was invited to project a new world view — with their eyes!

Some of my artist friends say they have a feeling of helplessness at the idea that art seems to be just a luxury in this urgent and devastating pandemic situation. What advice do you have for them?

I think we can take heart in the fact that many people turn to culture in these times of physical distancing and concern. Culture has an incredibly important role to play in times of crisis, because it is one of those few spaces in society that can truly host difference, where we can come together to exchange and discuss. Getting together around art, also online, is a way of finding space for imagination, of inventing worlds, of being together while staying apart. More than a luxury, it gives people hope.

To up footfall, department stores go all artsy