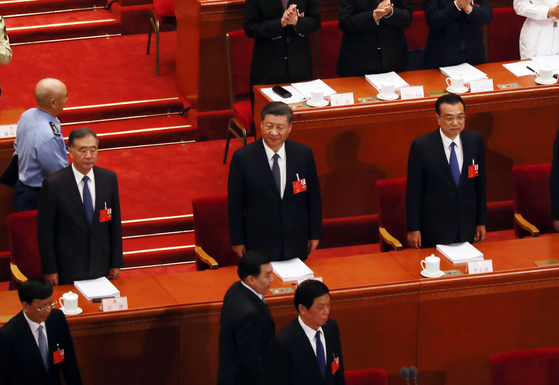 Chinese President Xi Jinping, center, attending the Chinese parliament meeting held in Beijing on Friday. The Chinese government decided not to set a growth target this year amid the coronavirus pandemic. [YONHAP]

Korea is stuck in the middle as tensions grow between its two largest trading partners, China and the United States.


The lines have become particularly stark since U.S. President Donald Trump proposed the economic prosperity network, which would include companies and other organizations that operate under a similar set of common standards. It is aimed at reconfiguring the global value chain to make it less China-centric and more open.

Korean companies are concerned that the tensions could lead to a replay of the trade disruptions that occurred when Korea hosted U.S.-led Terminal High Altitude Area Defense (Thaad) antimissile system batteries. The retaliation by China hit the economy hard.

China is Korea’s largest trading partner, buying 25 percent of its exports, while the U.S. is No. 2, taking 13.3 percent. The web is a tangled one, as many of Korea's intermediate goods are exported to China for use in final products bound for the United States.

If the United States cuts trade with China by 10 percent, Korea stands to lose $28.3 billion in exports to China, according to an estimate by Hyundai Research Institute.

“The damage was limited to Korean retail, tourism and consumer goods sold in China in 2017 when China retaliated against Thaad,” said Yoo Hwan-ik, head of the Federation of Korean Industries corporate policies department. “But the recent conflict between the United States and China is in a whole different class and could affect the Korean economy overall depending on how the situation evolves.”

Yoo said Korean businesses will have to strike a balance as they react to the pressure from one country and the need for another.

While the impact of U.S. restrictions on Shenzhen-based Huawei will be limited on Samsung Electronics, and SK hynix as the target is non-memory chips, Korean chipmakers may be affected if Huawei cuts back on production that will lower demands for memory chips.

Given its dependence on China and memory chips in general, Samsung Electronics, Korea's largest company by market capitalization, is said to be especially concerned. Samsung Electronics Vice Chairman Lee Jae-yong sent strong signals to China during his recent three-day trip to the country.

Since the United States placed Huawei on its export-restriction blacklist in May 2019, the Chinese company has requested the Korean chipmakers to maintain parts supply. Similar messages have been sent this year. Huawei is estimated to purchase 10 trillion won ($8 billion) worth of DRAMs and NAND flash memory from Korea annually.

Korean petrochemical companies, where sales to China account for 43.6 percent of all exports, as well as steel and machinery companies, which have high dependence on the Chinese markets, are also on alert about the souring relations between the countries. Airlines are worried as well, as are shipbuilders.

The automotive industry is far less concerned as it has shifted production to Alabama, Georgia and Mexico.

Local industry projects the conflict between the two countries to continue until the U.S. presidential election in November. As such, it is closely monitoring economic uncertainties due to the conflicts including consumer sentiment and financial market instability.

The continuing battle between the United States and China is a major burden, as businesses have been suffering due to the ongoing pandemic.

Finding a solution in the current atmosphere isn't easy, especially as Korea has strong relations with the United States in terms of national security and has a high dependency on China economically.

“[Korea] needs to expand economic cooperation with Asian, European and South American markets while aggressively encouraging Korean business reshoring,” said Hyun Jung-taik, Inha Foundation chairman and former economic bureaucrat, who served as the Blue House’s senior secretary for policy coordination. “Also, there’s a need to build up diplomatic communication abilities and expand [communication] channels as there will be more pressure from the United States and China to choose a side.”

Drawing a U-turn is a tough job