Beef prices at all-time high on bottlenecks and stimulus

Beef prices at all-time high on bottlenecks and stimulus 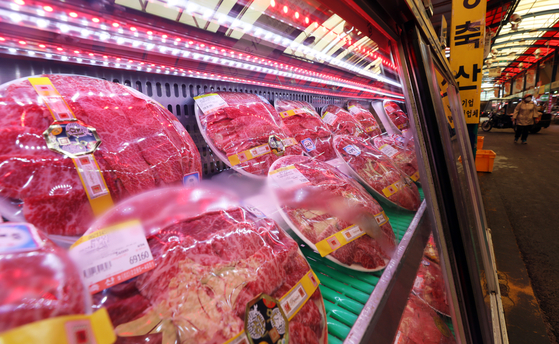 Beef is displayed in a butcher shop inside the largest meat market in the country, Majang Meat Market, in Seong-dong-district, eastern Seoul, on May 19 [NEWS1]


The wholesale price of beef hit an all-time high on Friday, trading for 21,340 won ($17.16) per kilogram, as production dropped and international supply chains buckled and as stimulus money flooded the market and drove consumption.


It’s a dramatic increase. A kilogram (2.2 pounds) of beef was going for 16,000 to 18,000 won last May, according to the Korea Institute for Animal Products Quality Evaluation (KAPE).

The price jump is mainly the result of supply-demand imbalances caused by the Covid-19 outbreak. According to the KAPE, 249,599 cows were processed in the first four months of the year, down by 0.5 percent compared to the same period last year, as the coronavirus pandemic forced beef auction markets to close. Bottlenecks formed as buyers were unable to attend these events due to the need to social distance.

In March, the domestic supply of beef dropped to 14,771 tons, down by 39.6 percent compared to January when the coronavirus was at its early stages.

Imports have also been dropping, especially as processing plants overseas were shut down due to the outbreak, further limiting supply in the market. Totals were down 2.2 percent on year, to 123,000 tons, in the first quarter. U.S. imports, which are usually half of the total, were particularly hard hit. They were down 7.7 percent on year in April to 1,600 tons.

As supply dropped, demand surged after the government rolled out disaster relief funds, which have put cash into the hands of almost everyone in the country. Hana Institute of Finance analyzed the purchase history of its credit card holders and found that sales at butcher shops increased by 26 percent during the month of March.

The trend was evident at convenience stores. From May 13 through 18, around the time when the central government started distributing coronavirus grants, sales of domestic beef products spiked by 76.4 percent compared to the week-earlier period at GS25 convenience stores.

Cooking at home may have played a role as well. People have been buying ingredients to prepare their own dishes in the age of social distancing and work-at-home directives.

“Government grants seemed to have pushed up the price of beef by expanding demand for domestic beef in May, when beef is normally less popular,” Kim Sa-gyun, a researcher at the National Institute of Animal Science, said.

Manufacturing was the engine of economic recovery