Starting Tuesday, people won't be allowed to board Korean buses or get into taxis without a face mask.

A similar restriction for subway and train users is being discussed as well.

The latest measures, relayed by the Korean central government’s coronavirus command center, came as health officials have been struggling to contain sporadic Covid-19 clusters and after a few of those patients contracted the disease using public transit.

For months, health officials have warned the public to wear face masks when leaving their homes and using public transportation, and a few local governments have allowed some transit operators to refuse passengers if they aren’t wearing a face covering.

But this is the central government's first nationwide no-mask, no-ride rule.

Officials on the Covid-19 command center explained Monday that under Korea’s legal system, the government can’t fine or “directly impose” any penalties on passengers not wearing a face mask on public transit. In a circuitous move, officials said they decided to tentatively lift the threat of 200,000 won ($161) fines on bus and taxi operators who refuse to accept passengers without a “just reason,” allowing taxis and buses to refuse passengers without face masks — and without worrying about a possible fine.

This means that passengers won’t face any legal punishment for trying to get on a taxi or bus without a face mask either.

The command center Monday urged all taxi and bus drivers to wear face masks at all times as well, stressing that if they don’t, their local government office will be told to take “corrective actions.” 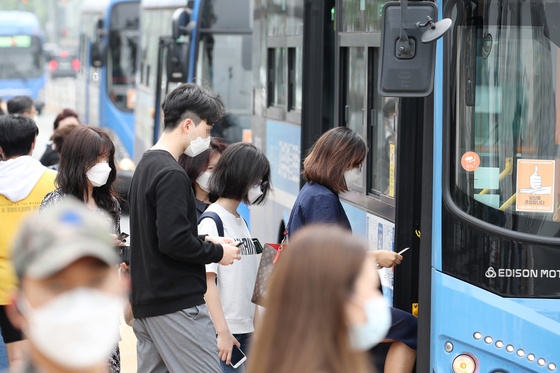 People are seen wearing face masks as they board a bus in Seocho District, southern Seoul, Monday, a day before a new rule goes into effect that allows bus and taxi drivers to refuse passengers without a face covering. [YONHAP]

Airplane passengers, likewise, will be required to wear a face mask in order to board flights starting Wednesday.

Similar measures for passengers on trains and subways are under discussion with relevant agencies, the command center noted.

In the aftermath of a large cluster of infections linked to nightclubs and bars in Itaewon-dong, central Seoul, the command center said Monday that the government plans to introduce a QR code system for businesses with high risks of Covid-19 transmissions.

The program is expected to allow customers to scan their smart phones at the entrance of a club, bar, noraebang (singing rooms) or other nightlife establishments to digitally convey their name, phone number, the name of the establishment and what time they visited to encrypted databases managed by the state-run Social Security Information Service (SSiS) and other private companies that widely use QR coding systems. The companies, including Naver, will offer the QR codes, officials said.

The user’s name and phone number will be managed by the companies providing the QR codes, while the SSiS will separately manage information about the establishment and what time that person visited.

If a new Covid-19 cluster emerges, the companies and the SSiS will be required to hand over the information to health authorities, the command center said, adding that each customer’s data will automatically be discarded from the databases four weeks after their visit.

The command center said the program is scheduled to go on a pilot run early next month and officially commence in mid-June, and keep running while Korea maintains its current highest level on the four-tier infectious disease alert system, or the third level.

The number of Covid-19 infections linked to the Itaewon cluster grew to 237 on Monday noon, up from 225 Sunday noon. All 12 new cases were patients who didn’t personally go to a club or bar in Itaewon recently, but had contact with someone who did.

Many recent cases were specifically connected to a 25-year-old instructor of a private hagwon (cram school) in Incheon who partied in Itaewon’s King Club early this month and later lied to epidemiologists when he came down with symptoms of the virus, claiming he was “unemployed,” which delayed contact tracing of his students and their acquaintances. They spread the disease in their local communities, including at a coin noraebang joint — where customers sing in smaller rooms than in a standard noraebang — a buffet restaurant and a taxi.

Some 50 cases have been traced to the hagwon instructor so far, with the cluster growing.

The cluster around Samsung Medical Center in Gangnam District in southern Seoul, one of Korea’s five largest hospitals, remained at nine Monday since the first patient was detected a week ago. Four nurses, two friends of a nurse and three people linked to a bar in Gangnam that the nurse and her two friends hung out in on May 9 have been diagnosed with Covid-19 so far. 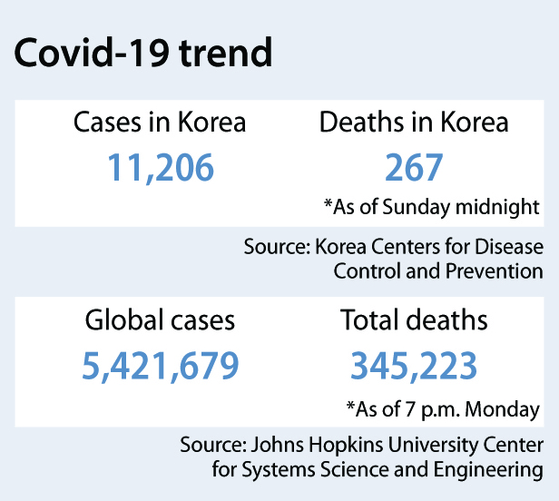 In Gangseo District, western Seoul, a 6-year-old kindergartner contracted the virus from her 29-year-old teacher at an arts hagwon, raising alarm in the neighborhood just two days before kindergartners across the nation are to return to school.

The teacher had contact with three colleagues at the hagwon and 35 students. Health officials said Monday they were in the process of testing some 96 people.

Seoul health officials said they were discussing whether to postpone the openings of kindergartens in the area with infected students, saying that a final decision would rely on forthcoming test results.

Korea added 16 new infections Sunday, three of which were imported, bringing the country’s total case load to 11,206, according to data from the Korea Centers for Disease Control and Prevention. By Sunday midnight, 267 people had died, up by one from the day before, while 10,226 people have been declared fully recovered, up by 13 from the previous day.