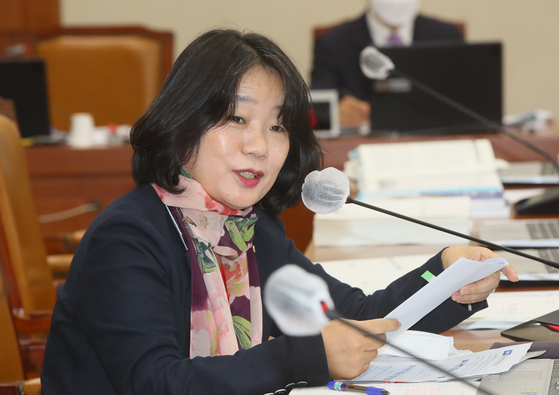 
Rep. Yoon Mee-hyang of the ruling party, a renowned activist for survivors of Japan's wartime sexual slavery, was indicted on Monday for misappropriating donations intended to help the victims, commonly known as “comfort women."

The Seoul Western District Prosecutors’ Office said it has indicted Yoon, a proportional lawmaker of the Democratic Party (DP) on eight charges including fraud, embezzlement and breach of trust.

Before being elected as a lawmaker for the ruling party, Yoon was the head of The Korean Council for Justice and Remembrance for the Issues of Military Sexual Slavery by Japan. She came under intense scrutiny in May, following public accusations by Lee Yong-soo, a comfort woman survivor and longtime activist for the victims, who alleged that Yoon had exploited her and other survivors for decades.

After a four-month investigation, the prosecution announced its decision to indict Yoon on Monday afternoon. Yoon was attending a National Assembly session when the indictment was announced and quickly left the legislature without expressing her position.

She has consistently denied the allegations against her, resisting pressure from the public and the opposition parties to give up her lawmaker seat over the scandal. Yoon issued a statement Monday evening maintaining her innocence on each of the charges against her.

The prosecution accused Yoon of misappropriating more than 100 million won ($84,533) intended to support the comfort women survivors and operate the Korean Council. She instead used the money for her private uses, according to the indictment.

Yoon allegedly collected donations in five personal bank accounts and told donors that she would use the money for the funeral of a deceased survivor and to pay for survivors’ overseas travels, but ultimately embezzled 57.55 million won of the donations.

Yoon was also indicted on a charge of quasi-fraud against a 92-year-old survivor who is suffering from serious dementia.

The prosecution accused Yoon of having taken advantage of a physically and mentally incapacitated survivor, and forcing her to donate a total of 79.2 million won to the Korean Council between November 2017 and January of this year.

According to the prosecution, a senior employee at the Korean Council was also indicted on Monday as Yoon’s co-conspirator. Yoon and the official were indicted for collecting a total of 4.1 billion won in donations from the public from 2015 through 2019 without registering their campaign with the government authorities. Prosecutors did not name the alleged co-conspirator.

The prosecutors said Yoon had also committed a breach of trust to the Korean Council.

Under Yoon’s leadership, the Korean Council spent 750 million won out of Hyundai Heavy Industries’ 1 billion won donation in 2012 to purchase a house in Anseong, Gyeonggi, supposedly to use the property as a shelter for survivors. Purchased from an acquaintance of one of her friends, the house was sold at the price of 420 million won in April this year.

Through that arrangement, Yoon offered financial gains to the buyer while incurring loss to the Korean Council, the prosecution said.

Yoon was also accused of operating an illegal lodging business at the house. Without registering with local authorities, Yoon rented the house out to civic groups, political parties and individuals on more than 50 occasions, receiving a total of 9 million won from them from 2014 through 2019.

According to previous media reports, the shelter was rarely used by the survivors while it was owned by the Korean Council, which Yoon conceded in her statement Monday.

Yoon was also indicted on charges of falsifying a document, which allowed the Korean Council to receive about 300 million won in museum subsidies from the Ministry of Culture, Sports and Tourism and the Seoul Metropolitan Government from 2013 till 2020.

Yoon falsely stated the organization's exhibition center had a curator, according to prosecutors, allowing it to be classified as a museum and making the organization eligible for the subsidies.

“She used the survivors for her private gains and betrayed the people who supported the survivors,” Rep. Kim Eun-hye, spokeswoman of the PPP, said, while demanding an apology from the ruling party for having protected Yoon.

The DP did not immediately issue any statement about the indictment on Monday.