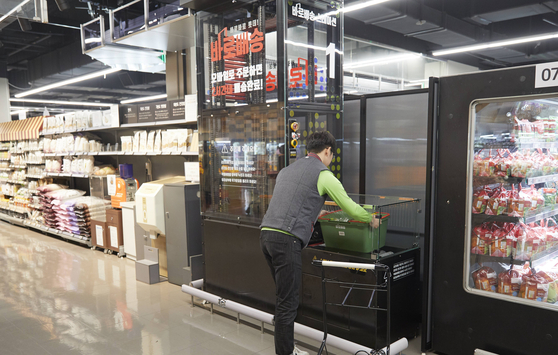 
Lotte Mart has seen a huge increase in online orders since introducing a new delivery service that enables customers to receive packages within two hours of placing an order.

On April 28, Lotte Mart installed picking and packing facilities inside its branches in Nowon District in northern Seoul and Gwanggyo in Suwon, Gyeonggi. The retailer saw orders placed online rise 130.8 percent at the Nowon branch and 175.6 percent at the Gwanggyo branch from April 28 through May 20.

Demand for groceries in particular jumped from 35 percent to 45 percent of total orders.

To follow the growing popularity of online shopping while using its existing infrastructure, Lotte Mart chose to invest in facilities inside its brick-and-mortar stores instead of separately building distribution centers.

Stores are being updated in two ways. One option is called a "smart store" where everything from picking and packing is automated. These facilities are visible in the store in the same aisles where people shop. The other type, a "dark store," uses a closed section of the store as an automated packing facility. In these branches, pickers — employees who shop for online customers — will collect items from the shelves in the public area and then carry them into the packing facility.

“Lotte Mart decided to install the facilities at the existing stores instead of building new distribution centers focused on handling online orders to save costs and to improve the efficiency of the operation since it’s difficult to get approval to open distribution centers,” said Lee Chang-gyun, a spokesperson for Lotte Shopping.

Lotte Mart also plans to expand a "smart pick" collection system that enables customers to personally pick up orders placed online. It will also install refrigerated storage facilities for those who order groceries.

This allows customers to pick up deliveries at their desired time, making them “active customers who choose the time and the method to get the products delivered,” according to Lotte Shopping.

“Short distance delivery is seen to have triggered the boost in demand for groceries,” wrote analyst Kim Myoung-ju from Mirae Asset Daewoo in a report released Tuesday.

Efficient spending for last-mile delivery and fixed costs like distribution of workforce are benefits of the service, according to the report.

Kim added, “Making such use of offline stores will be a new investment point for retailers with brick-and-mortar stores.”

Ikea store planned to open in Daegu by 2025