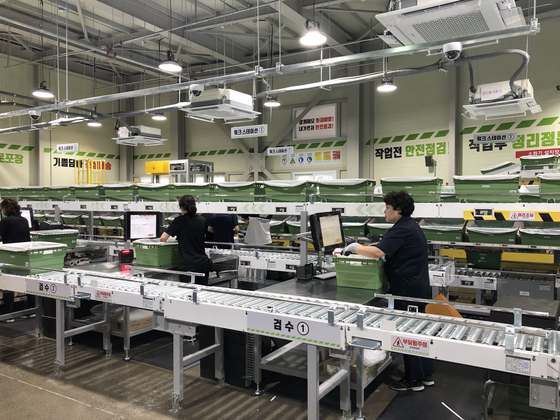 Lotte Shopping is transforming offline Lotte Marts as it struggles with the rapid rise of online shopping.

Dark stores refer to spaces that look like supermarkets but only cater to orders for delivery or collection. In a semi-dark stores, a separate space in the back will exclusively handle online orders. Products will be picked up by hand but packaging will be automated.

“Semi-dark stores, which can cater to offline orders and expand the process capacity for online orders, is a strategy in response to the growing online groceries market,” said Lotte Shopping in a statement Thursday. “Once there are 29 [semi-dark stores], Lotte Mart is expected to be able to process five times more online orders than it can handle now.”

Lotte Shopping will start with the branches in Jamsil, southern Seoul, and Guri in Gyeonggi, in late November.

To automate packing, Lotte Shopping plans to adopt autonomous mobile robots and a so-called Put Wall, a packing system that categorizes packages based on regions by scanning.

Autonomous mobile robots will first be tested in the first quarter of next year at two branches.

Lotte Shopping said there will be 12 smart Lotte Mart stores that are equipped with automated picking and packing facilities by 2021. The first two smart stores opened in April.

“Using the discount stores nationwide, [Lotte Shopping] plans to develop a delivery-based strategy,” said a spokesperson for Lotte Mart in a statement, adding Lotte will continuously come up with measures to make delivery more efficient.

The new plans were announced amid the continuous struggles Lotte Shopping faces, which have been recently aggravated by the Covid-19 outbreak. In the first half of this year, Lotte Shopping, which operates Lotte Mart, Lotte Department Store and Lotte Hi-Mart, swung to 242.31 billion won ($214 million) in net loss in the first half of the year from 186.06 billion won in net profit during the same period last year.