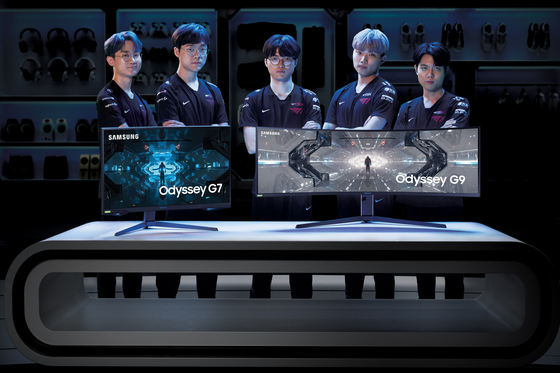 
Samsung Electronics has signed a partnership with T1 Entertainment & Sports, an Esports joint venture between SK Telecom and Comcast Spectacor.


With the agreement announced Wednesday, T1 team members — including Faker, one of the world's top gamers — will exclusively use Samsung’s latest curved gaming monitors, the Odyssey G9 and G7.

The move came as the electronics giant aims to promote its new lineup of gaming monitors. Samsung reigns as the top manufacturer in the sector with a 17.2 percent market share globally, according to market tracker IDC. In Korea, it retains a larger slice of the market, at 35 percent, making it the largest provider of monitors tailored for gaming.

The Odyssey G9 and G7 comes with an ultra-wide, curved monitor that spans 1 meter (3.3 feet), allowing the gamer to feel like they are surrounded by the game.

The high-end monitors, due to hit the market in June, will be displayed at T1’s new headquarters in Seoul to enable the professional players to try out and practice using the products.

The demand for gaming monitors is on the rise backed by the popularity of video games around the world, despite faltering sales of traditional PC monitors.

According to research from the WitsView research division of market tracker TrendForce, the 2019 shipment of gaming monitors is estimated at up to 8.5 million units, up 57 percent on year, compared to 2018 figures.

“With the diversification of panel types and monitor models from different brands, the growth momentum of this industry is expected to continue well into the next few years, with projected shipment of 11-12 million units in 2020,” it said.

The channel will provide different content and services for the gaming community.

These monitors do it all

Gen.G Esports teams up with Burberry to promote Esports culture