Foreign residents in Korea starting from June 1 will be required to get permits to re-enter the country and submit up-to-date medical reports detailing whether they have coronavirus symptoms on their return.

The Justice Ministry on May 23, just over a week before implementation of the measure, issued a notice about re-entry permits for long-term stayers, or registered foreign residents in Korea.

Foreigners staying in Korea for more than 90 days are required to apply for alien registration status. Since 2010, such registered long-term stayers have been exempted from re-entry permits for up to one year after leaving the country. That exemption will be suspended, at least temporarily.

From June 1, foreign residents in Korea who want to leave the country and return will need to apply for a re-entry permit at the nearest local immigration office or the airport. An application costs 30,000 won ($24). Leaving Korea without a permit will result in the cancellation of the person's alien registration status.

Upon returning to Korea, these individuals will also need to submit a medical certificate issued within the past 48 hours, written either in English or Korean, detailing whether they have any coronavirus symptoms.

The written diagnosis must be issued by an authorized local medical institute and include the date of examination and the signature of a medical examiner. The certificate should indicate if the individual has a fever, cough, chills, headache, difficulty breathing, muscle pain and pulmonary symptoms, but does not necessarily have to include a Covid-19 test result. A medical certificate confirming a negative Covid-19 result will also be accepted.

People who fail to present such medical certificates or provide fake ones could be denied boarding of an aircraft or entry into Korea.

Exceptions will be made to diplomats, government officials and overseas Koreans with F-4 visas.

The Justice Ministry said the measure will be implemented “taking into consideration the need to prevent the inflow of new Covid-19 cases and prevent community transmission.” 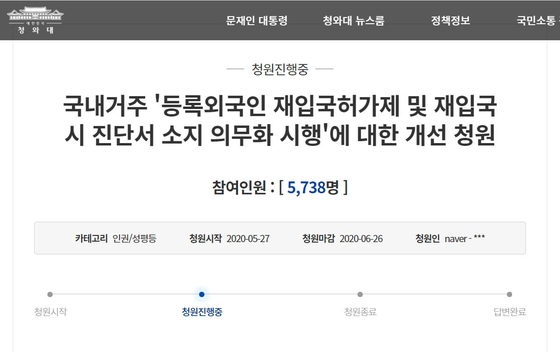 Over 2.4 million foreigners resided in Korea as of January, according to the Justice Ministry. The foreign population in Korea reached 1 million in 2007 and exceeded 2 million for the first time in June 2016. It peaked at 2.5 million at the end of last year, with over 1.7 million foreign residents that are registered as long-term stayers.

Some foreign residents with travel plans are concerned about having to visit a hospital or clinic to get a health certificate in English, while others are even raising human rights infringement concerns. Some foreigners point out that health care centers and clinics are not as readily accessible in their home countries as in Korea, especially without insurance coverage, and that getting a diagnosis translated into English at a public notary office creates another hassle.

A Blue House online petition calling for a revision to the Justice Ministry’s measures requiring re-entry permits and medical examinations for foreigners had over 5,700 signatories as of 5 p.m. Thursday afternoon, one day after it was submitted.

The original petitioner wrote, “As one foreigner residing in this country, I raise this petition determining that the related measure is unjust and discriminatory.”

The petition went onto describe that while accepting the need for the country to take actions to prevent the spread of the coronavirus, the Justice Ministry measure “does not apply to all the people” and discriminates against some, which it claimed was in violation of the National Human Rights Commission of Korea Act.

It noted that foreign residents in Korea have “carried out obligations to abide by the law and pay taxes” like every other citizen, but “despite carrying out all our legal duties, we are facing unfair treatment and are being marginalized in regards to our rights.”

“I was dismayed by this measure, which struck like a bolt of lightening,” one Chinese woman residing and working in Korea who asked to remain anonymous told the JoongAng Ilbo Thursday. She began her overseas studies in Korea in 2003 but eventually married a Korean and settled in Seoul.

“This policy that was hastily thought up by officials as a measure to respond to Covid-19 can almost seem like xenophobia,” she added.