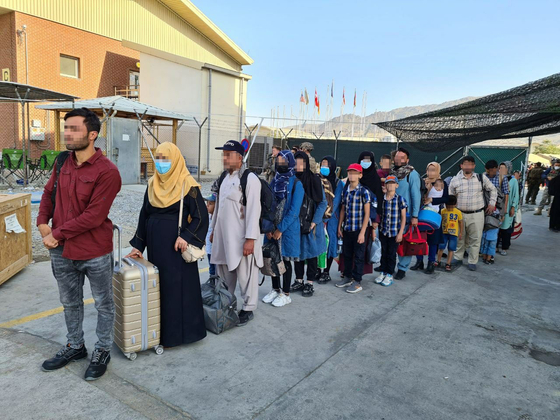 Afghans who have worked for the Korean government and their family members wait in line to board a South Korean Air Force transport plane at the Kabul airport Tuesday, local time. Some 390 evacuees are set to arrive at Incheon International Airport Thursday. [FOREIGN MINISTRY]


Three Korean military planes are airlifting some 390 Afghans out of the war-torn country, Seoul's Ministry of Foreign Affairs said Wednesday, to come to Korea.

Second Vice Foreign Minister Choi Jong-moon said in a briefing Wednesday that these Afghans, who worked for Seoul's embassy or on Korean government humanitarian aid projects over the years, will arrive at Incheon International Airport Thursday.

The Korean Air Force aircraft were flown to Pakistan and Afghanistan Monday to bring back Afghans who supported Korean government activities in Afghanistan and their relatives, Seoul's Foreign Ministry initially confirmed Tuesday evening.

The Foreign Ministry said Wednesday morning there were around 380 Afghans bound for Korea, and later updated the figure to 391 evacuees from 76 households. This includes around 100 children, of which three are babies born this month.

This is the first time the Korean government has decided to accept foreigners from a conflict zone on a large scale and relocate them to Korea for humanitarian reasons.

The ministry said that as the situation in Afghanistan deteriorated, many people appealed to the Korean embassy for assistance to fly to Korea, raising concerns over their personal safety and possible retaliations from the Taliban against U.S. allies.

The evacuees include medical professionals, IT experts, interpreters and other local staff who have worked for many years at the Korean Embassy in Afghanistan, the Korea International Cooperation Agency (Koica), the now shuttered Korean Hospital in Bagram, the Korean Vocational Training Center and a provincial reconstruction team in Charikar. Their spouses, children and parents are included on the list.

The Korean government initially considered transporting the Afghan evacuees on foreign chartered planes, but decided to deploy military transport planes after the situation in Kabul deteriorated.

In turn, the government set up a task force and planned the evacuation of the Afghans to Korea as fast as they could, dubbing it "Operation Miracle."

A KC-330 multi-role aerial tanker and two Lockheed Martin C-130J Super Hercules military transport aircraft arrived in the Pakistani capital of Islamabad Monday. The KC-330 tanker remained on standby in Islamabad, while the C-130Js began transporting the Afghans out of Kabul to Islamabad Tuesday. They were set to depart for Incheon airport Wednesday.

The flight from Islamabad to Incheon by a KC-330 multirole aerial tanker takes around 11 hours, while C-130J aircraft take around 17 hours because they need to be refueled.

Around 60 to 70 personnel, including military and medical staff, were deployed for the evacuation operation, said a Seoul Defense Ministry official. Noting that over a fourth of the evacuees are children under five, the aircraft were equipped with baby formula, bottles and other necessities for toddlers.

The Korean embassy was temporarily closed on Aug. 15 after Taliban forces swept into Kabul and all Korean diplomats and staff were evacuated to Qatar by Aug. 17. However, Korean diplomatic staff returned to Kabul Sunday to help support the operation, coordinating with allied countries like the United States to secure transportation routes.

A major hurdle for the evacuees were Taliban checkpoints on the way to Kabul airport. Some 40 of the Afghan evacuees lived outside the capital area. The Korean embassy, in cooperation with friendly countries, helped the evacuees reach their flights through six buses chartered at the last minute.

Choi stressed that the Afghan evacuees "are not refugees, but come to Korea as people of special merit."

He added, "Our government decided to welcome them to our country taking into consideration our moral responsibility amid a grave situation facing colleagues who have worked with us, our responsibility as a member of the international community and our global status as a leading nation upholding human rights, as well as the fact that other countries in a similar situation have also been transporting the Afghans."

The final number of evacuees was fewer than the 427 Afghans that had signed up to fly to Korea. A Foreign Ministry official confirmed Wednesday that 36 people ultimately chose to stay in Afghanistan or evacuate to another country.

This came as U.S. President Joe Biden said Tuesday that the United States is on track to keep an Aug. 31 deadline for the withdrawal of American troops from Afghanistan.

After the Afghans arrive in Korea, they will be tested for Covid-19 and isolated for two weeks at the National Human Resources Development Institute in Jincheon, North Chungcheong, following Covid-19 quarantine measures. They are expected to continue to be temporarily housed at the institute's Leadership Campus for at least six weeks, according to the Jincheon County Office.

They will arrive on short-term permits, which will later be extended to longer-term visas, said Seoul officials. The Foreign Ministry and Justice Ministry plan to provide further support and guidance should they wish to settle in Korea, or move to another country. Granting permanent residency could be one option for those who choose to remain in Korea.

Seoul officials said that background checks have already been conducted on the evacuees prior to their flights to Korea, and that their identities have been confirmed as they have worked with Koreans for years, some up to a decade.

Because they are entering Korea for "special merit," contributing to Korean government activities over the past 20 years, these Afghan evacuees' situation differs from refugees who first enter the country and then have to undergo a vigorous procedure to be legally granted asylum status.

Their situation can be compared to some 500 Yemenis who were granted by the Korean government in 2018 temporary humanitarian stay permits that allow them to remain on Jeju Island until the situation in their war-ravaged country stabilizes, said a Foreign Ministry official. 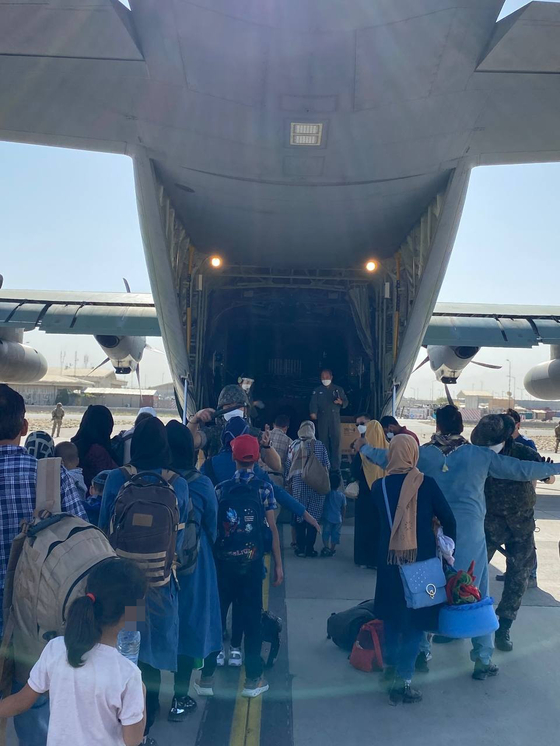 
President Moon Jae-in said Wednesday on the Afghan evacuation operation, "It is meaningful and natural for us to fulfill our moral responsibility to the Afghan people who have helped us," according to Park Kyung-mee, the presidential spokesperson.

Moon instructed the government and military to take care of the Afghans who worked with Koreans for their safe passage and to ensure that "there are no inconveniences after their arrival in Korea."

Separately, the Justice Ministry announced Wednesday that it will grant special humanitarian stay permits for Afghans already in Korea temporarily to continue to remain in the country.

As of August, there were 434 Afghans residing in Korea legally on short or long-term visas, according to the Justice Ministry.

The ministry has decided to allow foreign students who have completed their studies and short-term visitors who are usually allowed to stay up to 90 days to continue to reside and work in Korea with special permits if they want to stay.

Some 70 Afghans residing in Korea illegally will not be deported. They will be allowed to leave the country voluntarily after the situation in Afghanistan stabilizes.

The Justice Ministry said special stay permits will be granted after background checks of the individuals, taking into consideration public safety and terrorism concerns.