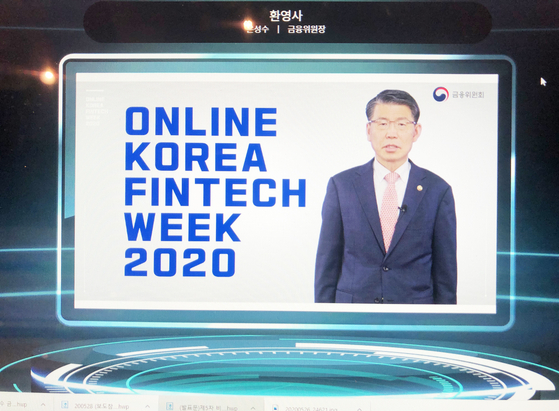 Financial Services Commission (FSC) Chairman Eun sung-soo delivers a virtual speech for the opening of the financial agency's Korea Fintech Week. The FSC decided to hold the event, its second since 2019, online because of the coronavirus pandemic. [SCREEN CAPTURE]

“We will particularly expand investments in fourth industrial revolution areas that will be the foundation of the Digital New Deal, including 5G, artificial intelligence [AI] and big data,” Eun said Thursday in opening remarks for the financial authority’s Korea Fintech Week that were played online.

In the face of the unprecedented economic crisis triggered by the pandemic, the Moon Jae-in government has announced a so-called Korean New Deal, whose blue print is to be announced next month.

The Korean New Deal is meant to pinpoint growth engines that would drive Korea’s economy in the post coronavirus era and contributes to creating sustainable new jobs, especially for young people.

“Covid-19 has not only changed the global order, the economic and social structure, but fundamentally changed our daily lives,” Eun said.

“A rearrangement of the global supply chain and industrial structure is being triggered while the digitalization of the economy and society is speeding up,” he added. “I forecast that we will not be able to return to the way we were.”

He said working at home, virtual meetings and non-contact transactions are growing.

“Our children are attending class on-line,” he said.

“Physical isolation from each other and hyper-connections based on networks are getting stronger,” Eun said. “Convergence and innovation through data and platforms and the speed of the fourth industrial revolution is getting faster.

“As a result I believe a new order and standard will be formed.”

Eun said the government is working on innovative strategies that will help the country not only overcome the coronavirus crisis but also help it lead the digital economy.

He said the government will push for regulatory changes and improvement in infrastructure, including three data laws that were approved by the National Assembly at the beginning of this year.

The three pieces of legislation — the Personal Information Protection Act, Information and
Communications Network Act and Protection of Credit Information Act — relaxed restrictions including access to personal data that inhibited start-ups from coming up with new services.

“Through the financial regulatory sandbox, we will create a testbed for convergences of fourth industrial revolution technologies and [traditional] finance,” Eun said. 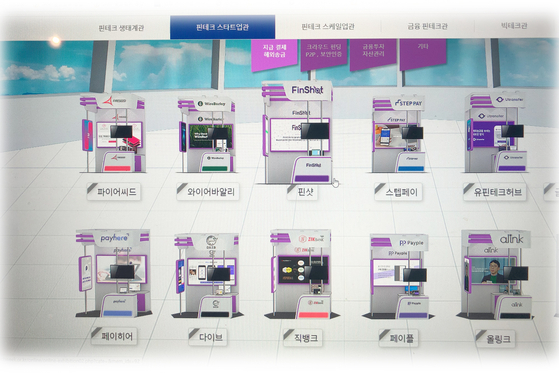 
This year Korea Fintech Week was held online because of the ongoing pandemic.

According to the FSC, 150 companies attended the event, which is being displayed in six virtual exhibition halls, while several special sessions were held on various subjects including the future of fintech in the post Covid-19 era.