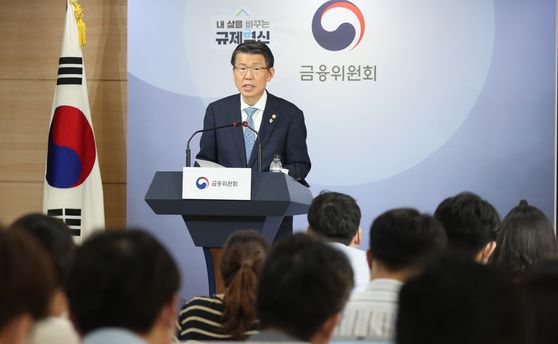 Financial Services Commission Chairman Eun Sung-soo answering questions at a press briefing on Thursday at its headquarters in Seoul. [YONHAP]


Toss will likely be able to continue with its application for an internet-only banking license despite recent thefts from its money transfer service, the financial regulator said. He also said that Korea's restrictions on short selling are likely to continue beyond September, when they were originally set to expire.

Eun Sung-soo, chairman of the Financial Services Commission (FSC), said that at this point he doesn't see a connection between recent theft from Toss accounts and the company's application for the banking license.

“The police and the Financial Supervisory Service (FSS) are investigating whether it was a hacking situation or if it was the result of private information being leaked,” said Eun on Thursday. “We would have to look at the investigation results.”

“Data is becoming positioned as a financial product,” Eun said.

He also said Mydata, which he referred to as one’s personal financial secretary in the palm of one’s hand, will add to the innovation in the financial market. Eun emphasized security, adding that by the third quarter the FSC will come up with innovative measures that will certify and verify user identity.

“Digital innovation is nothing but a sandcastle without the consumer’s trust that not only their personal information but the nation’s wealth is protected,” Eun said.

On Thursday the Nowon district police raided Toss and the game company Blizzard regarding the theft of 9.38 million won ($7,800) from eight Toss accounts. Toss earlier this week reported unauthorized transactions.

Viva Republica, the developer of Toss, told the Korea JoongAng Daily that it suspects an identity theft and not hacking.

The FSC chairman also said he would consider extending the restrictions on short selling, which was implemented in March as shares plummeted and triggered circuit breakers and side cars.

Short selling is a practice in which investors borrow shares and sell them on the assumption that the value will decline. This allows them to repurchase the stocks at a lower price, repay the stock loan and pocket the difference.

This practice, which is often executed by institutional investors, is seen by some as contributing to market instability.

On Asiana, the FSC chairman said the government could only fund the struggling company once Hyundai Development Company's (HDC) acquisition of it is completed.

“We have told the Korea Development Bank (KDB) to first commit the necessary funds to Korean Air,” Eun said, adding that in the case of Asiana, it is currently at an ambiguous stage for the government to be funding the airliner.

“The negotiation [between HDC, KDB and Asiana] first need to be closed,” Eun said.