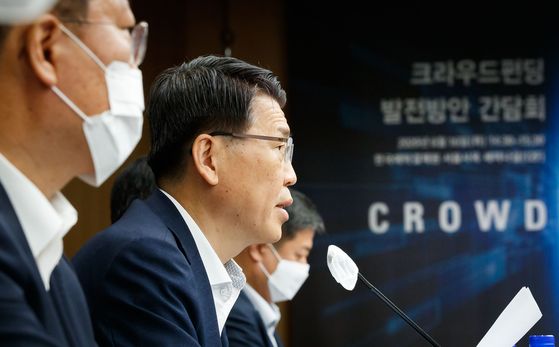 
The number of companies that are allowed to seek investment through crowdfunding is due to be expanded, with the government also doubling the cap on how much investment they can attract.


The Financial Service Commission (FSC) has decided to ease regulations on crowdfunding to not only help industries grow, but also lower barriers for small and midsize companies to secure investment.

According to the FSC on Tuesday, small- and medium-sized enterprises (SMEs) will be allowed to seek investment through crowdfunding, which was previously exclusively available to start-ups.

Additionally, the maximum amount of investment that a business can secure through crowdfunding will be raised from 1.5 billion won ($1.2 million) to 3 billion won.

The FSC said the goal is to expand crowdfunding into a 100-billion-won industry within the next five years.

The financial authority said it expects the number of companies seeking crowdfunding investment to be more than 500 by 2025, up from 195 as of 2019.

The government will also create a minimum 20-billion-won fund exclusively for crowdfunding and provide further support worth about 150 billion won by helping crowdfunding companies get loans from state-owned financial institution.

“It has been four years since crowdfunding was adopted [in Korea] and settled as a stable system,” FSC Chairman Eun Sung-soo said Tuesday in a meeting with crowdfunding industry officials. “We believe we need a strategy to move from the first phase to the second phase.”

The FSC chairman said the coronavirus pandemic is bringing about new changes throughout the business process, from production to distribution and even the way we consume.

“The changes in the way we live, including expansion of working at home and online shopping, is an opportunity for innovative, competitive companies,” Eun said. “[We] expect crowdfunding will grow into an important passage that will put wings on innovative companies’ growth.”

According to the financial authority, in the last four years 585 companies were able to raise 112.8 billion won in investment.

The FSC chairman has been emphasizing the need for investment in small businesses, especially during difficult times like the coronavirus pandemic.

During last week's press briefing, Eun said he believes it is appropriate to provide an umbrella when it rains.

The FSC, however, added that it will further strengthen protection of investors including prohibiting companies that have a history of fraud or criminal convictions, while stepping up monitoring.