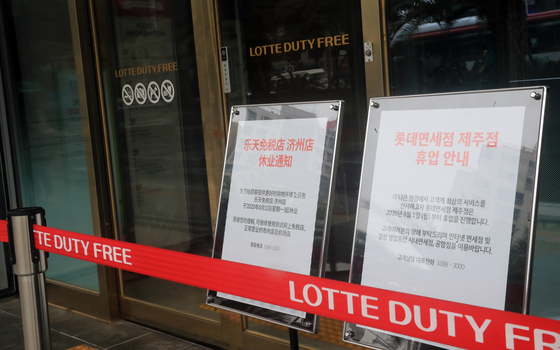 Signs informing customers of the closing of the store stand at the front door of Lotte Duty Free on Jeju Island on June 1. [YONHAP]


Shinsegae Duty Free on Wednesday released a flood of Yves Saint Laurent bags and Valentino wallets, being the first duty-free retailer to sell its inventory to local consumers under a special exemption.


Its servers crashed from the rush of shoppers browsing who were excited to receive up to 50 percent discounts on luxury goods. But some of them expressed disappointment about the products that were made available.


In April, the government temporarily allowed the sale of items in inventory for six months or longer into the local market. The exemption is limited to fashion accessories and handbags. The decision by the government was intended to help struggling duty-free stores make sales as well as clear leftover inventory, which would be returned or discarded if not sold.


Normally, people buying from duty-free shops have to prove that they are leaving the country and taking the goods with them. The products cannot be sold online to Korean customers.


The items being made available under the special exemption were not disclosed ahead of the event, as industry officials struggled to untangle issues related to the channel for distribution and the discount rates.


Shinsegae managed to be the first to finish the negotiations.


It made available items from Balenciaga, Bottega Veneta, Yves Saint Laurent and Valentino on Shinsegae International’s e-commerce site, sivillage.com. Goods from Givenchy and Fendi were made available on SSG.com, the online shopping mall of Shinsegae Department Store. The discount rate varied from 10 percent to a maximum of 50 percent. The products will be shipped starting around late June, according to the website. 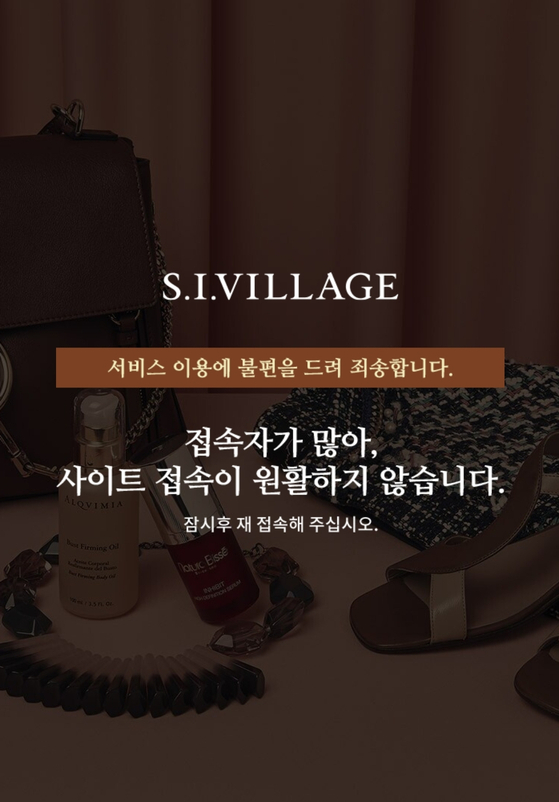 “Even though we increased server capacity 20-fold, the site froze for about an hour overwhelmed by around 150,000 people logging on to our site at once,” said the spokesperson from Shinsegae.

Of some 140 offerings, three, including a 2-million-won ($1,640) shoulder bag from Yves Saint Laurent, were sold out in the first hour.

Other duty-free stores will likely start selling locally as well.


Lotte Duty Free, the biggest player in the market, will likely begin the process late June in line with the upcoming mega summer sales that run from June 26 through July 2. The company said it is discussing with some 10 brands the offering of goods at its offline stores.


Along with sale of inventory to local customers, the duty free industry is getting some help from Incheon International Airport, which said it will reduce rent to help the struggling duty-free companies. The airport offered Tuesday an increased discount of 50 percent in rent for the three duty-free retailers; Shinsegae, Shilla and Lotte. The agreement will run March to August.


Industry officials say this will greatly help duty-free retailers, even more than the sale of inventory, as it saves a huge chunk in fixed expenses. According to Korea Investment and Securities, Shinsegae and Hotel Shilla, the operator of The Shilla Duty Free will save 108 billion won and 84 billion won, respectively, of fixed costs for the next six months.


After the pandemic, the number of airport visitors in March dropped by 85.7 percent compared to a year earlier.

“The industry is welcoming the move from Incheon International Airport. Currently, we pay around 36 billion won just in rent every month,” said an official from Shinsegae Duty Free. “While we still have to pay around 18 billion won, it is better than nothing considering that our sales are near 0 won these days.”


“While the local duty-free industry is in a difficult situation, the recent discount in rent and the government’s approval to sell left over inventory locally is likely to help retailers at least get out of the worst,” said Yu Jung-hyun, an analyst from Daishin Securities.