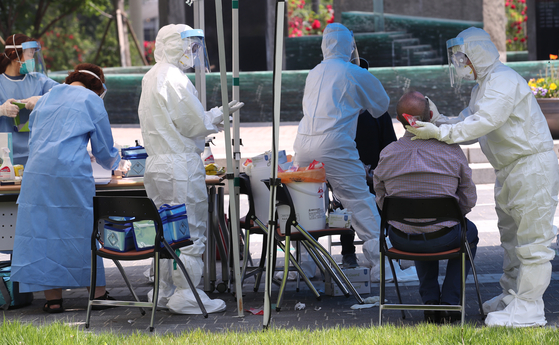 Medical staff take samples from a visitor for a coronavirus test at a temporary medical center installed at a park in Jung District, central Seoul. [YONHAP]


More than half of new coronavirus patients to test positive in May were in their 20s and 30s, Korea’s health officials said Friday, as they urged young people to abide by the government’s disease prevention guidelines.

The Korea Centers for Disease Control and Prevention (KCDC) said that 311 of the 596 new patients diagnosed since May 6, or 52.2 percent, were in their 20s and 30s. Of the country’s total cases, patients in that age cohort accounted for 38.9 percent.

The high proportion of youth adults diagnosed with the virus indicates the activities of a more active and energetic younger population may have led to an ongoing uptick in infections.

On May 6, when the first patient who partied at nightclubs in Itaewon-dong, central Seoul, tested positive, 38.2 percent of all virus cases involved those in their 20s and 30s. Korea’s initial mass contagion, centered around the controversial Shincheonji Church in Daegu, also produced infections primarily among younger people that made up the bulk of the sect’s adherents.

Much like the that wave of infections, the initial cluster that emerged from clubgoers in Itaewon continues to produce a ripple of subsequent outbreaks that threaten to undermine the successes of Korea’s fight against Covid-19.

On Friday, health officials reported 58 new cases, all in the Capital Metropolitan Area, putting the total number of cases in Korea at 11,402. 20 of the new cases were reported in Seoul, 20 in Gyeonggi and 18 in Incheon.

It was the second straight day in which more than 50 new cases of the coronavirus were confirmed in Korea, after health authorities reported 79 new infections Thursday — the most in nearly two months.

A 25-year-old private hagwon (cram school) teacher in Incheon, who partied at Itaewon’s King Club earlier this month, started a chain of transmission that included at least seven links before eventually causing a mass outbreak at the Coupang distribution center in Bucheon, Gyeonggi.

The number of infections linked to a large outbreak at the Coupang distribution center in Bucheon, Gyeonggi, rose to 96 on Friday, an increase of 27. A total of 70 people were infected at the distribution center, where goods purchased online are processed for delivery, while 26 are believed to have received the virus from contact with Coupang workers.

The alarming spike in cases in recent days prompted the Ministry of Education to announce Friday that it would be reducing the number of elementary and middle school students returning to classes in the capital area to one-third.

Two-thirds of all high school students will be returning to classes, per an earlier announcement by the ministry last Sunday. Schools outside of the capital area will also open classes for two-thirds of all students.

The decision highlighted growing concerns of contagion among students as the government proceeds with its phased reopening of classes across the country, following a two-month delay since early March.

High school seniors were the first to return to classes on May 20, followed by first, second, ninth and 11th graders as well as kindergarten students on May 27. The Education Ministry said there would be no changes to its timetable for reopening schools for third, fourth, eighth and eleventh graders on June 3, and fifth, sixth and seventh graders on June 8.

To ensure students will be able to wear face masks at all times when returning to classes, the Ministry of Food and Drug Safety announced Friday it would relax the government's rationing of face masks in June, and allow every individual to buy up to three masks on any day of the week. Those under 18 will be allowed to buy up to five every week.