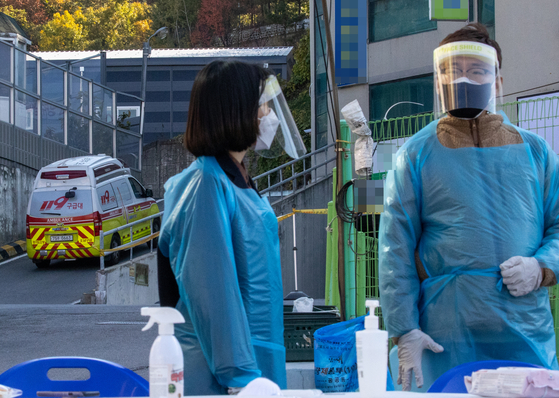 An ambulance enters a building linked to a Covid-19 outbreak in Namyangju, Gyeonggi, on Friday. [YONHAP]


The number of new coronavirus cases in Korea remained in the double digits for the second straight day on Saturday, but infections continue to emerge from clusters at nursing homes and hospitals.

A total of 61 infections were reported nationwide throughout Saturday, according to the Korea Disease Control and Prevention Agency (KDCA), marking a continued drop from the 77 reported on Friday and 155 on Thursday. The total number of Covid-19 infections in Korea stands at 25,836 as of Saturday.

No additional deaths were reported throughout Saturday, keeping Korea's total fatalities at 457. The mortality rate stands at 1.77 percent — one of the lowest in the world.

Of the new infections, 50 were domestic and 11 came from overseas, including travelers from the Philippines and Russia. A total of 44 of the 50 domestic cases were reported in the greater capital area, where sporadic clusters at hospitals continue to grow.

SRC Hospital in Gwangju, Gyeonggi, home to the largest active cluster, was linked to four new patients as of Saturday, adding to its total of 128 infections so far.

A nursing home in Namyangju also recorded 11 new cases, while a similar care facility for the elderly in Gunpo also reported three cases, both hotspots in Gyeonggi.

A systematic effort by the government to test all 160,000 or so patients and workers at medical centers catering to the elderly in Seoul, Gyeonggi and Incheon remains ongoing, with plans in place to test hundreds of thousands more outside the greater capital area.

New patients were also reported at a local doctors' office in Busan and a university hospital in Daejeon.

But while medical facilities remain the most vulnerable to cluster infections, cases continue to pop up sporadically at other institutions.

In Bucheon, Gyeonggi, 10 students who were taking classes at a ballet academy tested positive for the virus. So far, 16 patients have emerged from this cluster, possibly infected by a teacher who resides in Seoul, according to health officials. 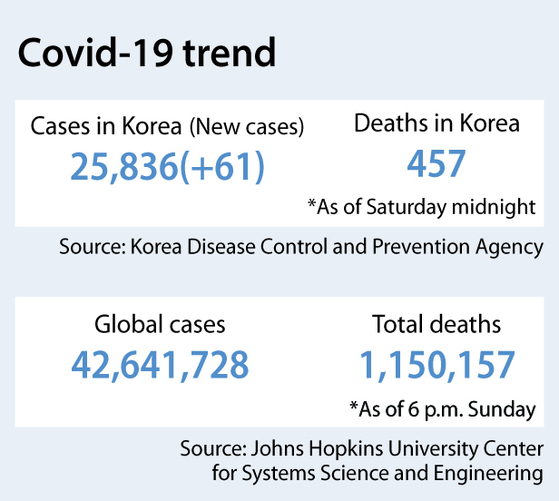 Taken as a whole, the second spike in infections that began in August appears to have been controlled despite concerns that relaxing social distancing guidelines to the lowest level could cause another major outbreak.

Health authorities, however, have raised concerns that people going out to celebrate Halloween on Oct. 31 may increase the risk of another outbreak similar to the large cluster that emerged from nightclubs in Itaewon, central Seoul in May.

"[Infections] could happen in any environment that is [packed, dense and closed off]," said Kwon Joon-wook, deputy director of the KDCA, in a briefing on Saturday.

"If you have any symptoms like a high temperature or breathing difficulties, please avoid using any public facilities like nightclubs and bars or any gatherings involving many people."