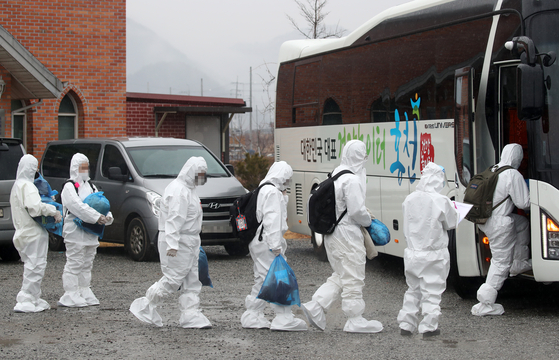 Students from the IEM School in Daejeon, who were found to be infected with Covid-19 while visiting a church in Hongcheon, Gangwon, board a bus to be transported to a treatment facility in nearby South Chungcheong Tuesday. [YONHAP]


A group of 39 people from a Christian missionary school in Daejeon were confirmed Covid-19 positive Tuesday while visiting a church in Hongcheon County, Gangwon, raising concern about the virus cluster's spread across regions.

Of 40 people from the International Education Mission (IEM) School in Daejeon, 35 students, two instructors and a pastor and his wife, tested positive Monday night, health authorities said Tuesday. One other student had an inconclusive test result and is being retested.

The students from the IEM School in Daejeon, who belonged to a missionary training program aimed at youths, and their supervisors have been training and residing in a church in Hongcheon since Jan. 16, Hongcheon County officials said in a Tuesday briefing.

The IEM School, an unauthorized school founded by International Mission (IM), a Korea-based missionary society that runs several church-related schools and facilities across the country, has infected 132 out of 158 students and faculty members as of Tuesday.

Hongcheon County was informed by police of the group from Daejeon Monday afternoon and proceeded to get the entire group tested. Two people from the Hongcheon church, acquaintances of the pastor, tested negative and are in self-isolation.

Some of the trainees, mostly in their 20s, and their instructors showed symptoms such as coughing and a fever, Hongcheon officials said, and had visited local clinics and bought medicine at pharmacies during their visit.

The group is suspected to have left for Hongcheon after the first Covid-19 case was confirmed at the IEM School in Daejeon on Jan. 12, based on questioning by Hongcheon County officials.

Officials note that they have been residing in close quarters without practicing proper social distancing measures, citing this as a reason behind the outbreak.

In the past 10 days, the group was found to have visited some 30 places including fast food restaurants, cafes, pharmacies, clinics and a laundromat. County authorities are reviewing CCTV footage and tracing the movement of the group in order to find close contacts with the local community. 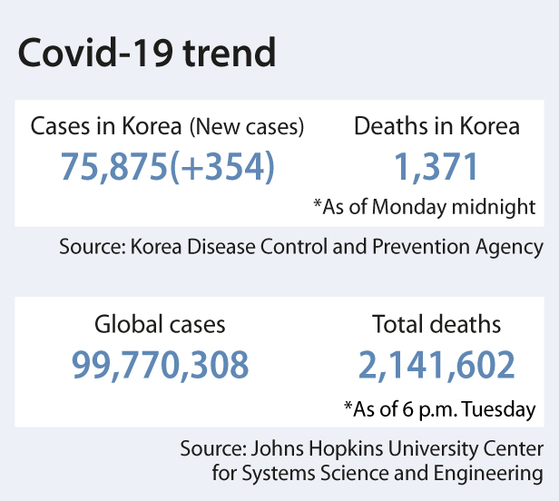 Korea reported 354 Covid-19 cases, of which 338 were domestic infections, as of Monday midnight, according to the Korea Disease Control and Prevention Agency (KDCA), bringing the total cases to 75,875. There were 11 more fatalities, raising the total death toll to 1,371.

Health authorities are concerned that the latest infections related to missionary training schools could lead to major clusters like previous outbreaks in other religious facilities like the Shincheonji Church of Jesus and the BTJ Center for All Nations.

IM recently held admissions orientation events at churches and facilities throughout the nation, with its staffers believed to have had contact with students and parents in various regions.

Health authorities said they have received a list of members affiliated with IM’s 22 facilities nationwide and shared it with local governments.

Prime Minister Chung Sye-kyun in a meeting on Covid-19 response Tuesday noted concerns over the IM-related infections as he ordered health authorities and local governments to “not overlook the smallest of risk factors and push quarantine measures to the point that it may seem excessive.”

He said, “The missionary group operates some 20 similar facilities across the nation, so people are concerned that this will lead to another widespread cluster. Having learned lessons from Shincheonji and BTJ Center cases, this time we plan to prevail in terms of speed,” in curbing the infections.

Fall classes will be normal despite high Covid numbers