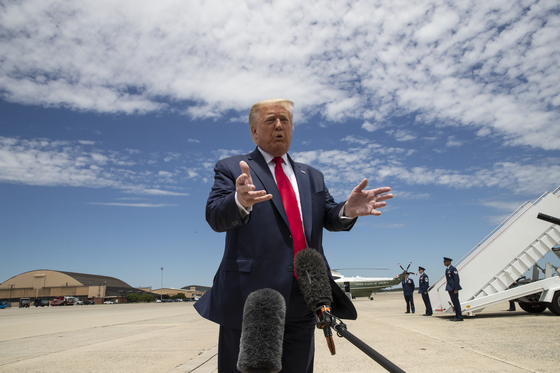 U.S. President Donald Trump speaks with reporters before boarding Air Force One to depart for Washington after visiting the Kennedy Space Center in Florida for the SpaceX launch Saturday. [AP/YONHAP]

U.S. President Donald Trump said Saturday that he plans to invite South Korea — along with Russia, Australia and India — to a Group of 7, or G7, summit that has been delayed to at least September.

Trump told reporters on board Air Force One returning to Washington from Florida, “I’m postponing it [a G7 summit of world leaders slated for June] because I don’t feel that as a G7 it properly represents what’s going on in the world.”

The president has advocated an expansion of the group and called the G7 group of industrialized nations — comprised of Canada, France, Germany, Italy, Japan, Britain and the United States — “a very outdated group of countries.”

Trump appears to be bringing together traditional U.S. allies in an expanded G7 meeting that leaves out the other G-2 superpower, China, especially following the fallout over a national security law for Hong Kong.

“We want Australia, we want India, we want South Korea,” Trump told reporters after attending the launch of the SpaceX rocket in Cape Canaveral, Florida. “That’s a nice group of countries right there.”

He described the possible gathering as a G10 or G11 meeting. However, such an expansion of the G7 would require consensus of the other members.

Alyssa Farah, the White House director of strategic communications, said Trump wants to bring in “traditional allies,” including so-called Five Eyes countries, as well as those impacted by the coronavirus, and talk about the future of China.

South Korea, Australia and India are among U.S. allies in the Asia-Pacific region that Washington has tried to get onboard its Indo-Pacific Strategy, a Trump administration initiative seen as trying to contain Beijing’s influence in the region.

Russia was expelled from the G8 in March 2014 after its annexation of Crimea from Ukraine.

The United States holds the rotating presidency of the G7 this year, and Trump canceled an in-person summit scheduled for March because of the coronavirus pandemic and replaced it with a videoconference instead.

In a tweet on May 20, Trump stated plans to hold an in-person G7 meeting in June at Camp David retreat in Maryland, but has faced mixed responses from G7 leaders over coronavirus concerns.

After proposing to delay the meeting, Trump said the G7 summit could be held around the time of the UN General Assembly in New York, which is set to kick off on Sept. 15, or after the U.S. presidential election in November.

Korea is a member of the Group of 20 leading economies, and has also closely cooperated with the United States in overcoming the coronavirus pandemic. To aid such efforts, Korea sent 750,000 coronavirus testing kits to the United States in April after a phone conversation between Trump and President Moon Jae-in the previous month, and in May sent 2 million face masks to be distributed to U.S. medical institutions. Separate donations of masks were made to 1950-53 Korean War veterans and Native Americans last month.

A Blue House official told reporters in Seoul Sunday that it is “aware” of reports on Trump’s plans to invite Korea to the G7 summit and that it is “a matter to be discussed with the United States in the future.”

But the official said the Blue House has “not received prior notification” of such plans.

However, the G7 summit, or an expanded version of it, could be an opportunity for Trump to rally support from allies to crank up pressure on Beijing, which he has been blaming for the pandemic, despite praising China at the beginning of the outbreak.

Sino-U.S. relations continue to deteriorate, and Trump has criticized Beijing for its handling of the coronavirus pandemic, calling it the “result of malfeasance of the Chinese government” in a press conference Friday.

On Friday, Trump ordered his administration to begin the process of ending the United States’ special treatment for Hong Kong and to impose sanctions on Chinese officials involved in a controversial new national security law on Hong Kong that would tighten its control over the semi-autonomous territory.

Trump also said Friday he is “terminating” the U.S. relationship with the World Health Organization (WHO), accusing China of having “total control” over the WHO.

Beijing’s Foreign Ministry in turn urged Washington Friday to “stop interfering” in its internal affairs and said that if the United States harms its interests, “China will take all necessary measures to firmly hit back.”

Korea has often been caught in clashes between its traditional ally, the United States, and its biggest trading partner and neighbor, China.