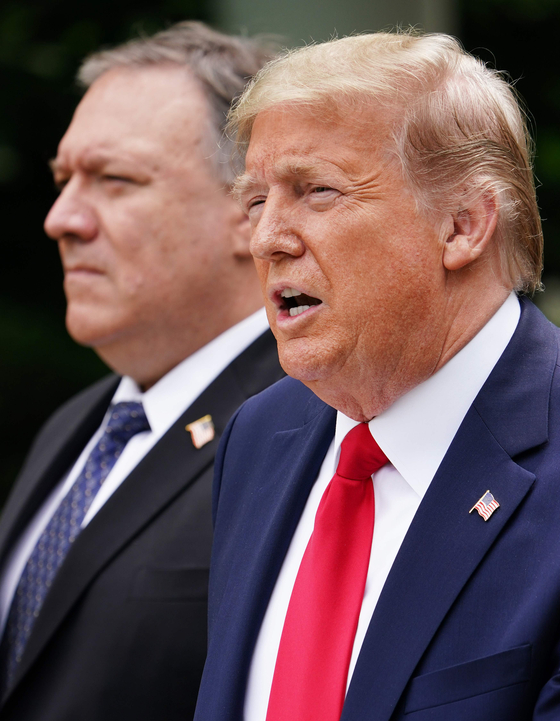 US Secretary of State Mike Pompeo, left, looks on as U.S. President Donald Trump speaks during a press conference on China in the White House Rose Garden in Washington Friday. Trump discussed tensions between the two powers over the status of Hong Kong. [AFP/YONHAP]

U.S. Secretary of State Mike Pompeo said Sunday that Korea and other American allies can be "good partners" in efforts to protect Western democratic values from Chinese threats.

Pompeo said that under the guidance of U.S. President Donald Trump and the Pentagon, “our national security establishment will keep us in a position where we can protect the American people, and indeed we can be good partners with our allies from India, from Australia, from South Korea, from Japan, from Brazil, from Europe, all around the world.”

He continued, “We can be good partners alongside them and ensure that the next century remains a Western one modeled on the freedoms that we have here in the United States.”

Pompeo is working to get allies on board with a U.S.-led initiative to ban Chinese tech giant Huawei Technologies, saying he is counting on European countries to do the “right thing” for their people.

Pompeo, a former director of the Central Intelligence Agency, claimed European countries are starting to recognize risks posed by Beijing and said allowing information “to go across Chinese-controlled networks is the antithesis” of providing privacy to its citizens.

The United States has warned allies against adopting Huawei technology for their 5G networks, saying this could prompt the U.S. to curtail its intelligence sharing practices. Washington claims that Huawei Technologies’ hardware is controlled by the Chinese Communist Party and could breach U.S. national security interests.

The U.S. Commerce Department last month issued a new rule that will take effect in September, barring Huawei and its suppliers from using American technology and software. The rule closed in on a loophole on existing restrictions allowing for foreign semiconductor makers to continue to work with Huawei, potentially impacting Korean chipmakers that rely on American technology while doing business with the Chinese company.

Tensions between Washington and Beijing, locked in an ongoing trade dispute, have escalated during the Covid-19 pandemic as the United States accuses China of mismanagement and not doing enough to prevent the spread of the coronavirus.

The previous day, Trump said aboard Air Force that he plans to invite Korea, Russia, Australia and India to a Group of 7, or G7, summit that could be held in September — coinciding with the new session of the UN General Assembly — or after the U.S. presidential elections.

Such a move to expand the G7 and include more U.S. allies is seen to reflect Washington’s efforts to contain Beijing, especially as the United States is retaliating against China’s implementation of a new national security law on Hong Kong.

Besides Russia, who was expelled from the G8 in 2014, the other countries listed are U.S. allies that Washington has courted for its Indo-Pacific Strategy, a Trump administration initiative seen as trying to curb Beijing’s influence in the region.

Pompeo during the Fox News interview touched upon a series of sensitive issues surrounding China, including Taiwan, the militarization of the South China Sea and the recent national security law for Hong Kong.

He said the Chinese Communist Party has become “much more aggressive” in its disinformation campaigns, cyber activities and “efforts to be in a position to do true destructive harm in different places all across the world.”

Referring to Hong Kong, Pompeo said, “The Chinese Communist Party has now broken its promise, and the United States will respond.”

Last Wednesday, he announced that the U.S. State Department no longer considered Hong Kong to have significant autonomy under Chinese rule, calling the national security law “the latest in a series of actions that fundamentally undermine Hong Kong’s autonomy and freedoms.”

China’s National People’s Congress on May 28 approved a controversial new national security law on Hong Kong that would tighten its control over the semi-autonomous territory. In retaliation, Trump ordered his administration the following day to begin the process of ending the United States’ special treatment for Hong Kong and to impose sanctions on Chinese and Hong Kong officials involved in “smothering Hong Kong’s freedom.”

Beijing in turn has warned it will apply “necessary countermeasures” to those who try to interfere in Hong Kong affairs.

Zhao Lijian, a Chinese Foreign Ministry spokesman in a May 28 briefing said that the U.S. attitude toward China “runs counter to the openness and freedoms the U.S. claims to champion” and has “exposed some Americans' deep-seated zero-sum game mindset and Cold-War mentality.”

Korea is inevitably feeling pressure amid the tensions between its traditional ally the United States and its biggest trading partner China, regarding Huawei and other matters. Korea previously faced retaliation from Beijing for the deployment of the U.S.-led Terminal High Altitude Area Defense (Thaad) antimissile system in 2017.

Seoul has also been expecting a state visit from Chinese President Xi Jinping later this year, which would serve as an indication of a recovery in relations since the Thaad fallout. A visit had initially been slated for this spring but was postponed due to the coronavirus pandemic.