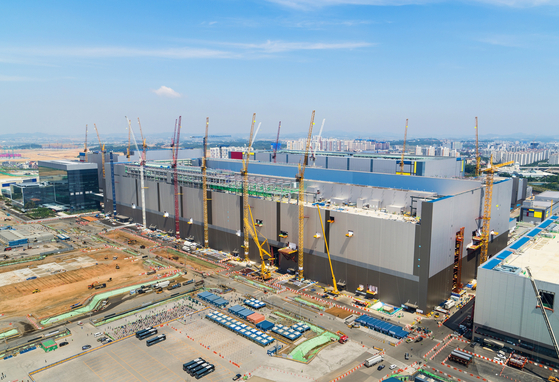 
NAND production will begin at Pyeongtaek Line 2 — known as P2 — in the second half of 2021, Samsung Electronics announced Monday.

Construction of clean rooms, one of the initial phases of the expansion that comes before adding production equipment, began in May.


NAND flash is nonvolatile memory that does not require power to store data. In other words, it can retain data once the power is turned off. DRAM memory lose data in the same situation.

While reports have circulated about the possibility of NAND production at P2 has circulated, the announcement Monday was the first formal confirmation by the company. Samsung Electronics said it was making announcements to emphasize its continued commitment despite the challenging market environment.


Samsung did not disclose the cost of the NAND flash expansion, but local news outlets have indicated the figure may be around 8 trillion won ($6.5 billion).


A big part of the investment will be used to purchase equipment to mass-produce “V-NAND” memory, which is Samsung’s brand name for 3-D NAND flash chips. Unlike 2-D products, 3-D NAND flash stacks can be stacked. Last year, the chipmaker had become the industry’s first to succeed in the mass production of 3-D NAND with more than 100 layers.


The announcement for NAND flash production at P2 comes within two weeks after Samsung said it will expand foundry capacity at the same location late May. Analysts estimate that that project will cost around 10 trillion won.


The total investments in P2 is likely to increase further, as Samsung is also planning to put in EUV equipment to produce DRAM memory at the new factory as well. In other words, P2 will hold the chipmaker’s latest production technology for DRAM, NAND flash memories and foundry, altogether.


P1, the other factory at the Pyeongtaek campus, produces DRAM and NAND flash memories. It started operation in 2017.


The chipmaker added in its statement that it sees strong mid- and long-term demand for NAND flash memory, fueled by artificial intelligence, the Internet of Things and 5G.


Samsung has been a leading manufacturer in NAND flash memory since 2002. According to DRAMeXchange, the chipmaker’s share in the global NAND flash market stood at 33.3 percent during the first quarter of 2020.


But its share of the NAND flash market is lower than its share of the DRAM memory segment, which stands at 40 percent globally. Challenging its leadership are global competitors also upgrading technologies.


In April, Wuhan, China-based Yangtze Memory Technologies (YMTC) announced it succeeded in the development of 128-layer NAND flash and that it would start mass production late 2020. Intel is also preparing to mass produce 144-layer NAND from this year.