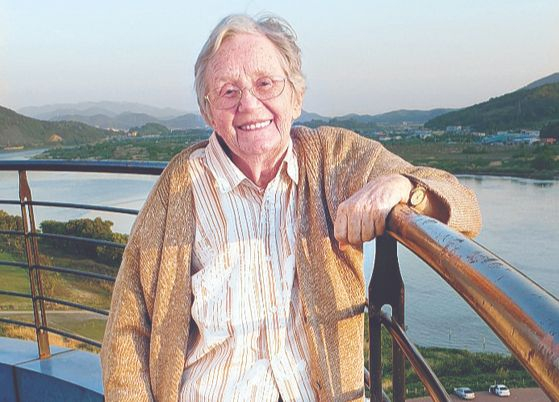 Susannah Mary Younger received a presidential commendation on May 20 for her lifetime of service work. [LEE YUN-SUK]


Susannah Mary Younger arrived with seven pianos at the port of Busan in December 1959, following a five-week voyage aboard a cargo ship from England.

But the 22-year-old's musical gift to Daegu Catholic University was only the beginning of what would become a lifetime of dedication to the city of Daegu. Now 83, Younger last month received the Korea's Immigrant of the Year award, a presidential commendation honoring her decades of service work that earned her the nickname "Blue-eyed angel."

Younger received the prize May 20, a day designated by Korea’s Ministry of Justice as Together Day to celebrate multiculturalism.
Her interest in Korea first started as a curiosity.

Since her youth, Younger held a deep faith in Catholicism, and was interested by how the religion survived in Korea despite the country’s turmoil.
Her father was a member of Parliament, and eventually became the vice minister of foreign affairs.

Around the time Younger moved from Scotland to England to attend Oxford University, her uncle and her cousin participated in the Korean War.

After graduating with a bachelor’s degree in philosophy, Younger decided that she needed to see the country for herself, and got in touch with the Catholic Archdiocese of Daegu, which oversaw the operation of all other Catholic churches in the city.

When she arrived in Korea, she witnessed a country deeply scarred from decades of colonial oppression and three years of armed conflict.

She once observed an impoverished family living under a bridge as it tried to make ends meet. Younger cited that as the moment she realized her calling, to devote herself to a lifetime of service and charity.

In 1960, Younger accepted a post as an English professor at Daegu Catholic University. While teaching, she continued her service work, constructing social welfare facilities and educating single mothers and children in North Gyeongsang, a region close to Daegu.

Four years later, while continuing to teach as a professor at Daegu Catholic University, Younger headed to Hayang, North Gyeongsang, where she provided food and jobs to the region’s less privileged by cultivating farmland on the slopes of Mount Bukhan. She obtained funding for the project from Oxfam, an association comprising several charity organizations.

Those who wandered by the mountain could observe, mid-slope, acres of corn and potatoes, interspersed with barns for animals.

The farmlands provided a new supply of jobs for the unemployed in Hayang Town, and the extra funds that remained from it were used to help establish Muhak Middle School and Muhak High School, all annexed under Daegu Catholic University.

Younger moved to France in 1973 to continue her service work and later worked in Burundi, Africa, to help establish a farmers’ association and cooperative. In the meanwhile, she never forgot of her fondness for Korea, visiting the country whenever she had the opportunity.

Younger was unable to attend the award ceremony for her presidential commendation at the Ministry of Justice headquarters in Gwacheon, Gyeonggi. Lee Yun-suk, the director of a Catholic social welfare foundation, attended the ceremony in Younger’s stead.

“Susannah is satisfied by the progress that Korea has made over the last 60 years,” Lee said at the ceremony, “Now she hopes that Korea will start to help countries more in need.”

Fire roars through 70 stores in one of Korea's largest markets