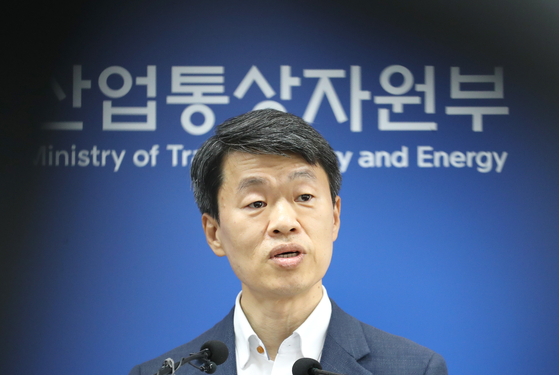 Na Seung-sik, head of the Korean Ministry of Trade, Industry and Energy's office of international trade and investment, announces Korea's decision to move forward with its World Trade Organization (WTO) complaint against Japan at the Korean government office in Sejong on Tuesday. [YONHAP]

The Korean government has decided to reopen its complaint at the World Trade Organization (WTO) against Japan’s restrictions on three key chemicals exports to Korea imposed nearly a year ago.


Korea had given Japan until the end of May to remove the trade curbs. Japan eventually responded, but the issue wasn't resolved.


The move is expected to further damage the already frayed relationship between the two countries.


“The Japanese government is showing no sign it is willing to solve the problem, and there are no discussions being held about the current problem,” said Na Seung-sik, head of the ministry’s office of international trade and investment. “Our government came to the conclusion that currently, normal conversation, which was the initial condition for suspending the WTO complaint, is going to be difficult.”


Na said the Japanese government gave an answer but added that it wasn't what the Korean government was expecting. He did not elaborate further on what that response was.


The ministry official said that in the last six months, the Korean government has actively engaged in discussing the matter with its Japanese counterparts and has explained to the Japanese government that Korea’s export management was normal and effective.


“We also did our utmost, including bold regulatory reform in the hope of contributing to solving the issue early,” Na said.


He emphasized that in the past 11 months there have been no security incidents related to the three restricted chemicals. Japan had originally cited security concerns as its reason for the tighter export controls.


“Through the WTO dispute complaint process we will protect the fair interest of [Korean] companies by objectively proving the unjust and illegal actions of Japan in restricting the export of these three materials,” said Na.


He added that the government will do all it can to resolve uncertainties over supplies between Korean and Japanese companies due to the trade dispute.

Na also said the Korean government is still open to discussing the matter with Japan.


The Korean government halted the WTO complaint in November, two months after it filed the complaint. The move came on the same day the Blue House decided to pull back on canceling the intelligence sharing program between the two countries — the General Security of Military Information Agreement (Gsomia), a threat used against Japan in rolling back the export restrictions.


The two sides have had two meetings since.


The first meeting, which was the first of its kind in three years, was held in Tokyo in December last year. The second took place three months later via a conference call due to the coronavirus outbreak.


Although the Japanese government has never acknowledged it, the move was considered a retaliation to a Korean court’s ruling in 2018 that forced Japanese companies to pay compensation for wartime forced labor.


The Korean government in early May emphasizing that it has met all of the requests made by the Japanese government and stressed the need to increase cooperation between the two countries in combating the coronavirus pandemic. It then gave Japan until the end of the month to respond.