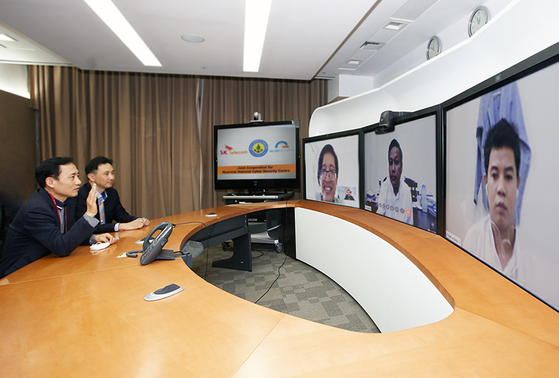 
The deal marks the first time SK Telecom has sold a complete security package, including hardware and consulting, to a foreign government. The company declined to disclose the exact value of the deal.

A government body under Myanmar’s Ministry of Transport and Communications, the National Cyber Security Center is in charge of protecting national state secrets from external hacking attacks as well as the country’s telecommunications network.


Under the deal, SK’s security experts will be sent to Myanmar to offer consulting on the architecture and installment of a central security management system through late July. The supplied software is made by another Korean company: Igloo Security. Its security information and event management software collects irregular activities and hacking attempts in the system and immediately sends alerts to a human manager.


During their stay, SK Telecom employees will establish response road maps to different scenarios, from security breaches to data leaks. The company will also offer its own software, the SmartGuard, that can assess the National Cyber Security Center’s possible weaknesses and improve them before they lead to security incidents.

From 2021, the Korean mobile carrier will embark on another project to build a security operation center that interconnects the security networks of Myanmar’s ministries of transport and communications, foreign affairs and education.


Until now, the three ministries were operating security systems of their own. Integrating them will make it easier to manage them, improve them and foretell cyber attacks, SK said.

The mobile carrier is hoping the Myanmar deal will lead to other security-related opportunities in the Southeast Asian market. The region is experiencing rapid economic growth, which SK said also leads to increased investment in security infrastructure.


“The export deal with Myanmar is meaningful in that it is a stepping stone to enter the security infrastructure business in the Asian market, and at the same time taking another local company with us,” said SK Telecom Vice President Shim Sang-soo.